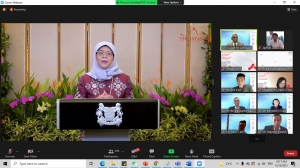 Guest-of-Honour, Mdm Halimah Yacob, President of the Republic of Singapore

SINGAPORE, October 18, 2021 /EINPresswire.com/ — Co-Founder and Global Hub CEO of Fourier Intelligence, Zen Koh, shares his thoughts and opinions on disability-inclusive hiring and how Fourier Intelligence devices can assist people with disabilities (PWDs) to return to work during the Masterclass organised by Human Capital Singapore (HCS) and SG Enable, which was supported by industry partners, Institute for Human Resource Professionals, Association of Small & Medium Enterprises, Singapore Computer Society and The Bosses Network.

The Masterclass, which was attended by the Guest-of-Honour, Mdm Halimah Yacob, President of the Republic of Singapore, was organised to bring together the Public-Private-People sector leaders to share best disability inclusive hiring practices and embrace a mindset for disability inclusive hiring as strategic competitive advantage for businesses. It is also to leverage on the inclusive mindset to promote dignity for PWDs as well as implement supportive employment policies and job redesign to seed a conductive organisation culture for PWDs.

In an opening speech by Madam Halimah, she recognised that employers play an influential role in the ongoing efforts to empower PWDs in society. She said, “Inclusive hiring has slowly turn into a reality, thanks to the collective efforts from many companies such as those that are present today.” She also added that employers who has signed for the President’s Challenge Enabling Employment Pledge can further build up their efforts to train, hire and integrate more PWDs in their company

Zen Koh, who was invited to share his views on disability-inclusive hiring, explained how Fourier Intelligence’s technologies can assist PWDs. “Fourier Intelligence’s devices can assist PWDs with their recovery as well as empower them to do more than just getting employed. The purpose of our devices is to ultimately enhance their quality of living, more than just in the working environment. In the previous years, robotic assistive technologies have been bulky, expensive and complicated to use. Therefore, we developed robotic assistive devices that can be easily accessible to everyone.”

Zen also emphasised on Fourier Intelligence hiring PWDs in the near future. “We have already signed the President’s Challenge pledge to further stamp our commitment in employing PWDs in the coming years. We believe that PWDs are as capable as others in completing tasks and should not be discouraged from employment.” Zen also mentioned that Fourier Intelligence will invest heavily in assistive technology in Singapore to enable PWDs to re-join society and workforce.

At the end of the Masterclass, a session was opened to the attendees where they are free to ask their questions to the panellists. When asked on how other companies can access to the rehab services by Fourier Intelligence for their PWDs, Zen mentioned that Fourier Intelligence’s technologies are being offered to the community through Cerebral Palsy Association Singapore (CPAS), AWWA rehab centre, Khoo Teck Puat Hospital etc. and worked with the NCSS to make Fourier’s services and technology accessible to everyone.