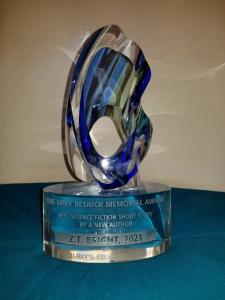 The first ever Mike Resnick Memorial Award for Short Fiction was awarded to Z. T. Bright during the Dragon Con Dragon Awards ceremonies.

ROCKVILLE, MARYLAND, UNITED STATES, September 9, 2021 /EINPresswire.com/ — Arc Manor, publishers of GALAXY’S EDGE magazine, and Dragon Con awarded the 2021 Mike Resnick Memorial Award to Z. T. Bright for his short story “The Measure of a Mother’s Love.” This new annual award is given to the best short story submitted to the competition by an unpublished author.

The two other finalists were Shirley Song and Torion Oey.

Judges for the award included Hugo and Nebula winners Nancy Kress and Lois McMaster Bujold; Shree Renée Thomas, editor of the MAGAZINE OF FANTASY AND SCIENCE FICTION; Jody Lynn Nye, author or co-author of more than 50 novels and 100 short stories; and Bill Fawcett, who has packaged and edited more than 400 science fiction novels as well as two oral histories of the Navy SEALs.

Lezli Robyn, GALAXY’S EDGE editor, was so impressed by all five finalists’ stories that she has decided to offer a contract to all five authors to publish their stories in the magazine. None of the authors are under any obligation to do so, but they will be paid the magazine’s going rate should they decide to accept the offer.

Submissions for the 2022 award are currently open. Any unpublished author may submit a short story for consideration. There is no fee or other costs associated with participating in the competition. More information on the competition is available at:

ABOUT ARC MANOR: Arc Manor is an independent press based in Rockville, Maryland. It publishes science fiction and fantasy under the Phoenix Pick and CAEZIK SF & Fantasy imprints and has published GALAXY’S EDGE magazine since March 2013. Please visit www.ArcManor.com or www.GalaxysEdge.com for more information.