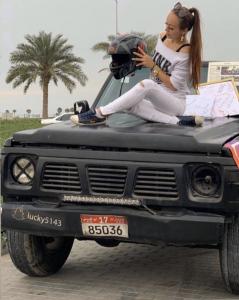 The influential 4×4 drifter gained notoriety as the first female racer to burn up the tracks in her iconic Nissan Patrol Y60 Black Edition.

Yuliana Grasman, a Gold Medalist in the UAE Mudcross Fest, holds over 15 medals to her name. The influential 4×4 drifter, gained notoriety as the first female racer to burn up the tracks in her iconic Nissan Patrol Y60 Black Edition. Yuliana revived the recognizable automobile after a serious accident which nearly totaled the car, restored it, and painted it black to mark this new era of her journey which inspired over 400 loyal fans to follow suit and paint their autos black. Another 700 car lovers now adopt the term ‘Black Edition’ because it denotes class, uniqueness, and success.

The Nissan Patrol Queen nominee owes her good fortune to hard work and her love for all things racing. She overcame many hurdles, but through it all Yuliana felt a rumbling in her tummy — it was her mission to top the leaderboard, building a bridge for future female drivers in competitive racing.
The award-winning model, actress, and YouTube sensation is no stranger to achieving success, and now Juliana takes Amazon by storm, as she turns her hand to conquer the literary field with her awe-inspiring book of poetry. The pages of “One Day: The World Has Been Changed” is full of rich balladry which chronicles her journey to stardom on and off the speedway.

Yuliana, lovingly known by fans as the Afra Queen, is also an accomplished actress, featured in films like “Zero” with Sharukh Khan, and the Emirati film “Unbeatable Fighter”. Yuliana’s goal is to inspire young people to live their dreams by teaching a new generation how to climb and subdue unsurmountable mountains. She believes if you can dream it, you can attain it.

The world-renowned beauty, who often rocks fashion-forward braids on the track, is adding another milestone to her rich career as the founder of Black Edition Empire, which birthed the sleek and modern Black Edition clothing line.

Grasman recalls the days when she hid her gender because men laughed at the idea of a woman behind the wheel. She used their laughter and disbelief as fuel to propel her to the top. Now, Yuliana holds the title as the first woman in world history to take part in the freestyle drift 4×4, as well as the 2-wheel drive on 4×4. They hail her as a hero in UAE racing, and around the world she is inspiring people to live their dreams and reach their potential.