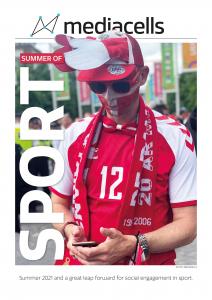 Summer 2021 and a great leap forward for social engagement in sport.

Record-breaking audience figures after the summer of sport are just the tip of the iceberg, say fan engagement analysts Mediacells.

Mediacells can reveal that audiences of England’s Euro 2020 final defeat, watched by more people than the World Cup 1966 final, glowed up on younger social media channels such as TikTok but are currently not quantified in traditional audience analysis.

TikToks on the official UEFA Euro 2020 account were played 650m times and liked by 69m people, according to the report.

“Each social media platform provides a unique function for fans in a way that traditional broadcast experience cannot. We are seeing new behaviours in younger audiences around this summer’s fiesta of sport which traditional media measurement is not detecting or at least not listening to,” remarked Brad Rees, Mediacells CEO.

While the opening ceremony of the Tokyo 2020 Olympics drew the smallest TV audience for the event in the past 33 years there was a younger audience – not immediately acknowledged in the headline TV statistics.

Half of younger audiences, often referred to as the ‘purpose generation’, said they were more engaged with Tokyo 2020 athletes who had some sort of activism platform.

Take US gymnast Simone Biles who attracted more than 15 million Instagram interactions, a 460% growth in engagement in her Instagram posts, after she announced she would not be participating in some individual and team events during the Games.

Rees continues, “Mediacells inference analysis of Simone’s Instagram engagements indicates the majority of reactions to her decision to abstain from some of the Games due to mental health, were resoundingly positive by a young and empathetic audience.”

The rise of TikTok and Instagram as fan engagement hubs is not restricted to one-off global tournaments like the Euros and the Olympics – the first three weeks of the English Premier League has seen significant levelling of the fan engagement playing field.

Premier League newcomers Brentford FC outperformed 15 of the 20 Premier League clubs, including Spurs and Arsenal, garnering 4.5 million plays from just one TikTok. The clip shows a tear-drenched older fan applauding the Bees’ first goal against Arsenal with the caption ‘He’s waited his whole life for that game’.

With the 2022 FIFA World Cup in Qatar coming soon the roll out of new fan engagement platforms and metrics for sponsors is looking likely, according to Rees. “UEFA was the first football organisation to partner with digital entertainment platform TikTok but will not be the last.”