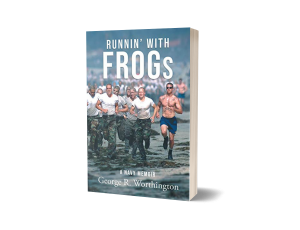 Runnin’ with Frogs: A Navy Memoir

COOKSTOWN, NEW JERSEY, USA, September 7, 2021 /EINPresswire.com/ — In times of conflict and struggle, it is in our nature to turn to a leader. We look to them for guidance and put our faith in their capabilities and skills. For some, taking charge and knowing what to do comes naturally. To others, it takes experience and training to have the charisma to get people through trying times. Whatever the case may be, those who are called to lead often form unbreakable bonds with those they are entrusted to collaborate with or serve. In the case of this retired Rear Admiral, George Worthington can proudly look back on his career and say he gave it his best. He looks back on his life in the service in his book “Runnin’ with Frogs: A Navy Memoir.”

Retired Rear Admiral George Rhodes Worthington has spent much of his career learning the ropes and eventually given command of his own men. Born in Louisville, Kentucky back in 1937, Worthington grew up in a time of conflict and struggle as the World Wars raged. After attending South Kent School in Connecticut, Worthington attended Brown University for a year. He then enlisted in the US Naval Academy and graduated with an ensign commission in 1961. He would hold many leadership positions and go on various operations around the world and even held a high position with the Pentagon, which allowed him insight into the political side of the Navy. Worthington retired from active duty in 1992.

“Runnin’ with Frogs: A Navy Memoir” details the many highlights in Worthington’s career. From his first assignment on the USS Haley Powell (which was a key participant in the Christmas Island Bomb Tests of 1962) to his tours of duty in Cambodia and Vietnam where he witnessed the rise and fall of those nations’ powers. The memoir also covers the people and organizations of note he encountered throughout his career and the groups of men he ended up leading. These include his colleagues while getting his Demolition Team Training, those who served under him when he commanded SEAL Team ONE, and those he worked within the Naval Special Warfare Command. Worthington looks back on these people with much fondness and reminisces about “running with frogs”.

Be inspired by Worthington’s story when you get your copy of “Runnin’ with Frogs: A Navy Memoir.”

Visit the author’s website at www.grworthington.com to know more about him and his book.