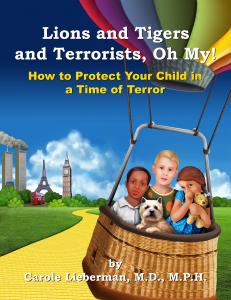 Lions and Tigers and Terrorists, Oh My! How to Protect Your Child in a Time of Terror.

The Terrorist Therapist Show is a weekly podcast that has been running over 5 years and appears at the top of
lists of the best podcasts about terrorism. Here it’s at the top of the list for 2021: https://player.fm/podcasts/Terrorist

The host, aka The Terrorist Therapist®, combines her knowledge as a psychiatrist and an expert on terrorism to talk
about the hottest topics in terror for the week from her unique perspective. Topics have included putting terrorists on
her couch to analyze them, and other terror topics that aren’t talked about in mainstream media. For example, she
was the first, if not only, one to say the Colorado mass shooter, Ahmad Alissa, was a terrorist-even before Al Qaeda’s
magazine put him on the cover to inspire other lone wolves.

Who is the host: The Terrorist Therapist®?

Carole Lieberman, M.D., M.P.H. is a board certified Beverly Hills psychiatrist who, since 9/11 has been helping
people ‘keep calm and carry on’ with her books, media appearances, speaking engagements and by hosting this
show. Her award-winning books include: Coping with Terrorism: Dreams Interrupted and Lions and Tigers and
Terrorists, Oh My! How to Protect Your Child in a Time of Terror. (www.terrorist therapist.com)

Who listens to The Terrorist Therapist Show?

Listeners not only come from all over America…. they come from Moscow, China, Saudi Arabia, United Arab
Emirates and many other countries – undoubtedly trying to get a perspective about terrorism that they won’t get from
our mainstream media!

What are some past show titles?

Where is The Terrorist Therapist Show found?

The best place to listen to the show is on Renegade Talk Radio because there is a description of each show
along with the audio. The show is also wherever podcasts are typically found.