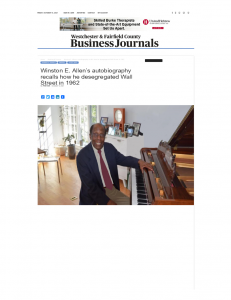 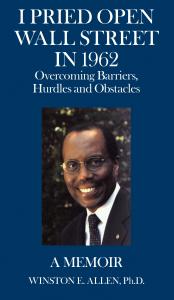 Back in 1962, can you imagine what it took to become the first minority owned Broker/Dealer in the history of the United States? The true story revealed.

I Pried Open Wall Street In 1962 to become the first minority owned broker/dealer in the history of the United States. The fascinating true story of breaking barriers in the financial world.”
— Winston Allen, Ph.D.

In 1962, the eyes of the world were on the American South as the civil rights movement sought to break down the Jim Crow environment that disfigured the nation through state segregation.

But less attention was paid north of the Mason-Dixon line — in New York City, to be specific — when Winston E. Allen quietly broke down the Jim Crow residue in the financial services sector by opening Creative Investor Services as the first Black-owned broker/dealer firm on Wall Street and the United States.

The 88-year-old Westport resident recalls his financial career in his newly published autobiography “I Pried Open Wall Street in 1962.” It is Allen’s third book — following his inspirationally focused “Don’t Get Mad, Get Rich” and “Live a Purposeful and Meaningful Life” — and he said he felt he was at the right point in his life to share his distinctive life story.

“I felt that it was time for a good, positive story about someone who feels good about what he did,” he said. “I had so many good things that happened over the times.”

The son of Jamaican and Grenadian immigrants, Allen grew up in New York City’s Harlem, and joked his childhood residence gave him the youthful impression that “I had Central Park all to myself.”

He never witnessed the burden of segregation until 1946 when he took a train to Miami.

“It was in a sealed compartment because Blacks were not even allowed to go near sleeping cars,” he said, adding that the view from the windows seemed utterly ordinary until the train reached Washington, D.C., and signs designating separate entrances and facilities for “Whites” and “Colored” suddenly began to appear.

“They were consistent right down the line,” he continued. “And I said, ‘Wow, who’s putting out these signs? Where do they come from?’ Coming back, I saw the same thing again and I said, ‘Okay, now we’ve got to deal with this issue.’ That was my first exposure to segregation in the United States.”

Allen initially pursued a career as a high school teacher, but quickly realized it was the wrong fit for him. Intrigued by global economics, he applied for and received a Fulbright Scholarship in 1961 that enabled him to study in Paris. He observed that at a time when the Freedom Riders were being harassed and assaulted in the South for daring to integrate bus transportation, he was enjoying first-class seating across Western Europe through the Eurail system.

Allen’s life took an unexpected turn while he was sitting in an outdoor café in Paris when Fran Cole, the niece of singer Nat King Cole and a friend from Harlem, spotted him. She was in the French capital studying piano at a conservatory and introduced Allen to her fiancé, Al Fogelson, who had recently taken a job as a Wall Street trader.

“His first bonus was $250,000,” Allen remembered with a laugh. “I was a teacher at that time in the New York City public schools — that was the job I hadn’t planned to do, I just stumbled into it because I needed a job.”

Allen was eager to follow Fogelson’s path, but there was one difference: Fogelson was White and Allen was Black, and Wall Street in the early 1960s was not a progressive environment. Allen arranged to be in a trader training class at Goldman Sachs, which was unaware of his race when he made arrangements by mail and phone.

“I could see the look on their faces,” Allen said, evoking the unhappy surprise of the Goldman Sachs staff when he showed up at their office. Other inquiries across Wall Street resulted in identical responses whenever he showed up, and he decided that he had to “find a way to get to Wall Street, and the way to get in there was to become a broker/dealer.”

Allen passed the National Association of Securities Dealers (NASD) examination and became licensed on Dec. 2, 1962. As no company would hire him based on his race, he started his own firm, Creative Investors Services, and began to hire qualified individuals who also had been shut out of financial services jobs due to discriminatory hiring practices common in that era.

Although he broke down a barrier, Allen was less interested in calling attention to himself and than in diversifying the financial services talent pool. He began to hold seminars at the Americana Hotel in New York City to train people on passing the NASD examination, and also taught classes at Fordham University. Without considering self-promotion, publicity nonetheless found him in 1972 when a New York Times reporter learned of his quiet breakthroughs — which also involved acquiring a home in an all-white Larchmont neighborhood that was not eager to have him as a neighbor.

The Times article was spotted by C. Peter McColough, CEO of Xerox Corp., who invited Allen to become the company’s manager of education, research and development. “Later it developed into director of this and that,” he laughed. “But basically, it was taking all of their employees for sales, service management and giving them my spiel.”

Allen stayed with Xerox for 10 years, until McColough’s retirement in 1982. During his tenure with the company, he was able to continue his ownership of Creative Investor Services. Following his Xerox exit, he earned his real estate broker’s license and became involved in the ownership and management of residential properties in Manhattan and its suburban markets.

In creating “I Pried Open Wall Street in 1962,” Allen admitted his life’s achievement happened without his attempt to orchestrate events.

“It’s not a planned story,” he said. “I can’t take credit for sitting down and designing anything. The thing that puzzled me a little bit was the fact that I was able to take opportunities opportunities that came along and maximized them. And I hope people will get from my book”