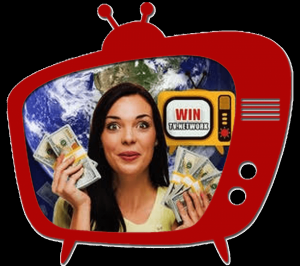 As you probably all know, most television “Game Shows” have been produced with only one to four contestants.

WIN TV has changed all of that “Old School” approach forever.

WIN TV NETWORK, by using state of the art technology, some brilliant in-house developed algorithms, and some very creative approaches to programming, has now opened up the television “Game Show” genre to where anyone, anywhere in the world can sit at home in the comfort of their living room and be a television “Game Show” contestant.

WIN TV has revolutionized the way that television “Game Shows” can be created in what WIN TV calls the “New School” production methods.

On May 1st a family who had subscribed to WIN TV for an annual “FAMILY PLAN” became the first winner in the first “TEST” “MONEY” game devised by WIN TV.

These “TEST” games are designed to test the security systems in the back end functions of the WIN TV website.

Baron Storm, Founder & CEO of WIN TV explained, “As a successful network television show producer who’s shows have been seen all over the world, it is essential that when you are awarding huge cash and other prizes you need to make sure that not only security protocols are in place, but also the procedures for validating and authenticating winners.

The first “TEST” game went without a hitch and the winners were fully authenticated and validated and a check was issued to them and sent by FEDEX within a matter of hours. This is one happy family who have made a tremendous effort in doing everything right in registering with WIN TV. Now with one win under their belt there is not stopping them from playing for more CASH in every game that we post.

At the end of the first year there will be a list of “WINNERS” on the wintv.network site and it would not surprise me that the top earners or teams will be taking home tens, if not hundreds of thousands of dollars. It will be really interesting to see how it happens and unfolds.” He said.

WIN TV is attracting attention from all over the world, particularly with advertisers because of the unique approach WIN TV is taking where the commercials are actually used in the actual content of the games.

Typically when commercials come on in normal television programming this is the time that viewers go to the bathroom or raid the fridge for a snack.

Well no more! People must watch every frame of the commercial or corporate video or tourism based video in order to win the prize.

WIN TV has created the perfect viewer and advertisers are flocking to WIN TV.

Those advertisers who book their global time will get the absolute best deal. In fact, why pay for local or national advertising time when you can get GLOBAL time for less?

As a new Global TV Network, WIN TV will work with anyone or any company, regardless of their advertising budget. The trick will be to make it work for everyone.

WIN TV is so excited by the launch of the second game which is really a form of a treasure hunt. To check out the game you need to visit wintv.network

Someone has to win the game and take home some cash. It could be you?

WIN TV is in the process of becoming a USA public company and has just released its first Private Placement news release that will see the Company raise over $100 million USD in private equity. Indications are that this will be fully oversubscribed.

Many people are comparing what WIN TV is doing to the television and entertainment industry as similar to the way UBER disrupted the global Taxi Business and the way that Amazon has changed the way we do shopping. WIN TV is certainly disrupting the television “Old School” production methods and has simply built a far superior and more profitable way of doing business.