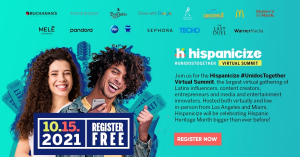 Now on its 11th year, Hispanicize is the largest annual event for multicultural trendsetters, aimed at being a force for good in the Latinx Community.

LOS ANGELES /MIAMI , UNITED STATES , October 12, 2021 /EINPresswire.com/ — In an unprecedented bi-coastal simulcast from Miami and Los Angeles on October 15th, 2021, legendary Latinx event and entertainment platform Hispanicize will close out Hispanic Heritage Month with one of their biggest events to date. Hispanicize is owned and operated by NGL Collective, the leading independent Latinx media and entertainment company, co-founded by John Leguizamo. Built around a mission of inspiring Latinx unity, empowerment and celebration, the Hispanicize #UnidosTogether Summit represents the biggest Hispanic heritage month event of its kind.

Hispanicize is the largest virtual gathering of Latinx influencers, content creators, entrepreneurs, media and entertainment innovators. Hosted both virtually and in-person from Los Angeles and Miami. This year Hispanicize will be celebrating bigger than ever before! Now on its 11th year, Hispanicize is the traditional annual event for multicultural trendsetters. Hispanicize is owned and operated by NGL Collective. www.Hispanicize.com

NGL Collective are the owners and producers of Hispanicize, as well as the leading independent Latinx media and entertainment solutions company co-founded by actor John Leguizamo. www.nglcollective.com