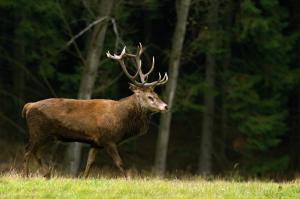 Elk in the wildlife corridors Bear in the brush

With the support of this legislation, the Tribes stand ready and committed to ensure that wildlife endures for all of our future generations.”
— Elveda Martinez

“Tribes are our nation’s first people and first conservationists with many fish and wildlife species having biological and cultural importance,” said Elveda Martinez, President of the Native American Fish and Wildlife Society. “The Recovering America’s Wildlife Act is monumental legislation for Tribes to protect these species and our cultural ties to them along with promoting tribal self-governance. With the support of this legislation, the Tribes stand ready and committed to ensure that wildlife endures for all of our future generations.”

Tribal lands and waters are essential for wildlife conservation. These lands provide vital habitat for more than 525 federally listed threatened and endangered plants and animals, many of which are both biologically and culturally significant to Tribes. Yet sadly, tribes rarely receive adequate funding for wildlife management to ensure these critical resources are conserved, protected, or restored. “Recovering America’s Wildlife Act will help remedy decades of inequity in fish and wildlife funding,” said Gloria Tom, Director of the Navajo Nation Department of Fish and Wildlife.

There are 574 federally recognized Tribes in the United States and some have very well-established fish and wildlife programs, some have no program or are just in the beginning stages of developing a program. Almost all share the need for new dedicated, annual funding to build capacity and carry out this important work.

“Our number one request for assistance by far is for help identifying funding,” said Julie Thorstenson, Executive Director of The Native American Fish and Wildlife Society. “Tribes often have to piecemeal their fish and wildlife programs through multiple funding sources including grants. However, grants do not build capacity, they are short term project funds and grants do not promote tribal self-governance.”

Recovering America’s Wildlife Act has strong Tribal support with resolutions from NAFWS, National Congress of American Indians, Affiliated Tribes of Northwest Indians, and United South and Eastern Tribes along with 50 Tribal letters of support representing 80 Tribal nations. It is also supported by a broad coalition of business, academic, and conservation leaders. Last Congress, it received bipartisan support, with more than 180 cosponsors in the House, and it was included as a bipartisan amendment to H.R. 2, the Moving Forward Act. With such broad-based support, NAFWS is hopeful for swift passage of this landmark bipartisan legislation.