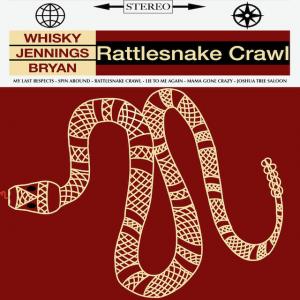 LOS ANGELES, CALIFORNIA, UNITED STATES, September 23, 2021 /EINPresswire.com/ — WHISKY JENNINGS BRYAN throws a rope around friends and collaborators to create a fresh group of songs for a new record, RATTLESNAKE CRAWL now available on Spotify, Apple Music. Concentrating on a core of western themes, Whisky writes about the desert and our relationship with the vipers in life. Singing about loss and heartbreak, truth and lies, tenderness and fear, Whisky assembled a group that features powerhouse Canadian talent to create WJB’s follow-up to 2020’s ALL WE NEED.

Coming back for Whisky’s third record is CAM GIROUX on drums (Weeping Tile, Suzie Ungerleider). Cam brings a sonic boom through his full “Four on the Floor” approach to each and every song. His dynamics and groove set the pace and power for the record.

STEPHEN HAMM (Slow, TankHog, Canned Hamm, Theremin Man) picks up the bass duties for the entire record. Hamm was a cameo on Whisky’s previous record ALL WE NEED, but as he stretches out on this recording, his artistry really shines.

New to the collaboration is SUZIE UNGERLEIDER, the award-winning folk singer, who previously recorded under the moniker Oh Susanna. She sings a duet with Whisky and fills that lonesome void with her powerful tenor.

PAUL PIGAT (Cousin Harley, Boxcar Campfire, and the Paul Pigat Trio) comes screaming out of the gate with a slide guitar solo on “My Last Respects” that should leave you clutching your pearls like a surprised debutante.

Most of the recording happened in Vancouver and Toronto, Canada. The record was mixed by Scott Barber at the Barbershop in Echo Park, California, with mastering by Philip Shaw Bova, a Grammy nominated engineer in Ottawa.

The rollicking record snakes along the desert side road beckoning with toe-tapping songs that come with a poisonous bite:

MY LAST RESPECTS, is an forthright and fervent crash through the horse corral gates, breaking out into the wild open western landscape. The search for love in a new wilderness.

The secret hideaway we all crave, away from spying eyes and devilish tongues has turned into a carnival ride. The Ferris wheel takes you up into the sky, filled with dreams and endless possibilities. SPIN AROUND as you hold on to the myth of privacy.

RATTLESNAKE CRAWL expresses a desire for human connection in the most honest and fragile way. The shaking rattle from the viper’s tale seduces – come closer, and closer until the bite fulfills on the poison promise.

After years of being bit and somehow surviving, one becomes immune. Not only immune, but strangely drawn to empty words to fill a wounded soul. If you LIE TO ME AGAIN, is a promise to act boldly, but will we?

MAMA GONE CRAZY is a measure of an emotional life. The crazy we all sustain brings loss and joy, failure and rebirth. The tender moments of bliss. The frightened moments of dread.

Left alone to stare at the desert sky sitting inside a JOSHUA TREE SALOON, one grapples with the empty space calling out to be filled. We struggle to know each other on the deepest level, but fight the impulse to do so with every ounce of strength we have.

Released alongside the album is a Music Video for “MY LAST RESPECTS”.

Music Video for “My Last Respects”