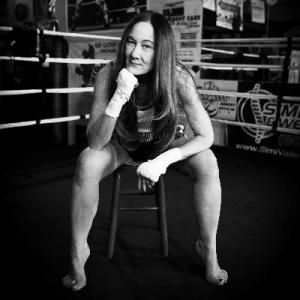 LOS ANGELES, CA, UNITED STATES, July 5, 2021 /EINPresswire.com/ — To this day, the skills I discovered in boxing translate to everyday life: I learned that the fight starts from within—and when faced head-on with conviction, honesty, vulnerability and faith—the battle is sublime.

These skills became invaluable when the pandemic hit in March of 2020, forcing millions into isolation to prevent the spread of the Corona Virus. Like many, I was filled with fear of the unknown, combined with feelings of doom during this unprecedented time, which some compared to the End of Days.

Just one month before the pandemic hit, I published Fighting Chance, with high hopes of book signings and appearances that never came to pass as every venue was shuttered. At first, I thought I made a mistake, and questioned the timing of my first book, which took two decades to finish before publication on Valentine’s Day of 2020. But after some contemplation, I realized my book came out at the perfect time as it was praised for giving readers strength and hope. Later that year, I was humbled to receive the 2020 North Street Book Prize in Creative Nonfiction & Memoir, in which Judge Jendi Reiter stated: “During this difficult year, we were happy to read an upbeat account of endurance and empowerment. Fighting Chance is an inspiring human-interest story for sports fans and feminists alike.”

Having faith in the unknown is one of many lessons I learned during the pandemic. I knew I’d be self-defeated if I steered away from dream as an author. I had to remain upbeat and positive all on my own, without confirmation of book sales, speaking appearances or publicity. This was a daily battle as I forced myself to meditate, take a walk in nature, and not allow the media to infuse my psyche with negativity.

Even though I retired from boxing in 2000, the skills I learned in the ring helped me through the pandemic. I survived wars against vicious opponents, which meant I could also survive this frightening time in our world’s history. Boxing is described as a noble art of self-defense, the sweet science, a channel for courage, determination and self-discipline. Boxing combines athleticism with skill, strength and artistry, and those who stay with boxing learn important skills for life: focus, heart and dedication—and how to get up when knocked down.

Alicia Doyle is the author of the acclaimed autobiographical book, “Fighting Chance”. Since it was published in February of 2020 – just one month before the global pandemic hit – it has won three literary awards: First Place in Creative Nonfiction and Memoir in the 2020 North Street Book Prize Winning Writers Competition; 2020 WBAN “Cool Story of the Year”; and 2021 Best Autobiographical Book.

In April of 2020, Slavica Bogdanov, a 20-time-awarded Canadian screenwriter and owner of Empowering Entertainment, partnered with Doyle to bring her true story to the Silver Screen.

Doyle, a journalist for more than three decades, discovered boxing at age 28 in the late 1990s when she went on assignment at a boxing gym for at-risk youth. For two years, Doyle simultaneously worked as a newspaper reporter while training and competing as a boxer, making her one of only a few hundred women in America who infiltrated this male-dominated sport. During her boxing career, she won two Golden Gloves championship titles and earned three wins by knockout – and her pro debut at age 30 in the year 2000 was named The California Female Fight of the Year.

Statement from Joyce Rivera on the Passing and Determination of Death of Actor Michael K. Williams