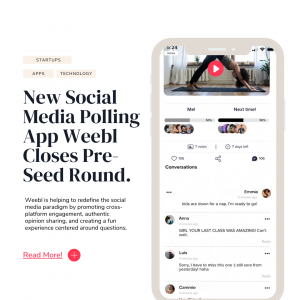 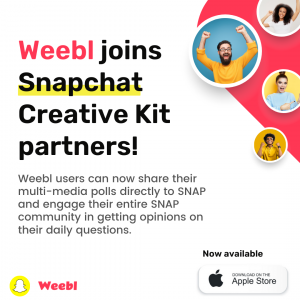 Weebl is redefining the polling experience on social media by making polls fun and engaging, while promoting app interoperability with cross-platform sharing!

Weebl is a fun new way to pose group questions on social media and gather opinions from friends and followers on a wide range of topics, such as fashion, fitness, finance, entertainment, sports, and beauty. Specifically, bloggers, social media influencers, YouTubers, and any other internet persona with an audience can easily survey and discover opinions across all their social channels. The exciting new social media polling app empowers users to captivate their followers using polls with a variety of content, such as audio, video, photos, and links, to creatively express their questions and gather opinions from friends and followers. Leading the charge on the future of social media via the lens of interactive discovery, Weebl is the new star in the social media space, connecting people from across all platforms to collect feedback, engage in conversations, and freely share their opinions.

With the injection of new capital, the company has released its first iteration on iOS, following a successful beta period that began in March. The app has quickly scaled to thousands of users, helping to substantiate an initial hypothesis that people are searching for better ways to ask group questions and get organized feedback. After spending time with beta users and conducting market research, the team at Weebl had concluded that with an enhanced product, they can really help to bridge a growing divide in the siloed social media app market.

So far, influencers and early adopters are loving Weebl’s ability to increase engagement and bring all their communities together. “Weebl really is the easiest way to ask a question to my 15,000 followers that are spread out amongst LinkedIn, Twitter and Instagram.” – said Andrew, an early beta tester.

Weebl’s new release will allow its users to captivate their audience, from their various social media accounts, with immersive multi-media polls. To simply vote and see results, viewers don’t require the app. If they want to join conversations after they vote or become poll creators, they’ll need to get the app. Weebl was founded by two friends and colleagues in the tech community: Urgent.ly cofounder and longtime tech serial entrepreneur, Surendra Goel, and fellow tech entrepreneur, Art Binder. After rapidly assembling a dynamic team, consisting of their friends and colleagues, they quickly got to work on making social polling a more meaningful experience. Binder, who operates as the company’s CMO, had this to say, “Millions of people use polls every day, like the embedded poll feature found in Instagram stories, to gather feedback. But, with the intertwining of social media, e-commerce, and branding, polling will inevitably evolve into a more integral part of the social media experience. Users will naturally want to get more direct feedback from their friends and followers while establishing a more intimate connection. However, polls today are lagging behind. They’re unimaginative, limiting, and platform-specific. We’re aiming to change that.”.

Co-founder and CEO Goel emphasizing the importance of app interoperability added “One of the biggest problems with social media today is that it is a vacuum of information and the algorithms can cause serious confirmation bias, and we’re trying to solve that with a cross-platform tool that allows you to mix your communities together, get confronted with differing opinions and see the world from other points of view. That’s what Weebl can do”.

Weebl is meeting the demands of a new generation of opinion seekers. Poll creators will engage with friends, followers, or fans across all platforms. The sky really is the limit for Weebl, with the upcoming latest release ushering in a fresh new phase of boundless discovery for the social media world.

The world’s easiest way to poll your friends and followers seamlessly across all social media channels! Download Weebl now to find out what your audience really thinks: https://apps.apple.com/us/app/weebl/id1531006444

Maan Ventures was founded in late 2014. We are a venture capital firm focused on early-stage startups. We deploy capital in Angel, Seed, and occasionally Series A rounds. We’ve invested in a variety of industries from hardware security to medical devices. All our investments and partnerships have the following things in common: Open communication, founders trust, strategic capital, & long-term approach.

“Maan Ventures has gotten to know Surendra through continued conversations since being founded in 2014. We are excited to be joining Art, rejoining Surendra, and helping the rest of the Weebl team as they build out their platform and pursue their ambitious mission to add let’s Weebl to today’s lexicon” said Manesh Gupta, Managing Director.