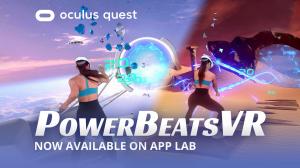 MUNICH, BAVARIA, GERMANY, October 20, 2021 /EINPresswire.com/ — VR developer Five Mind Creations proudly announced that the full version of their VR workout game PowerBeatsVR is now globally available for Oculus Quest 1&2 on Oculus Quest App Lab for a one-time fee of $22.99 / 19.99 EUR. According to the developers, there will be no subscription ever.

PowerBeatsVR has been awarded and nominated several times in its category for offering highly intense and customizable full-body workouts. Players have to move, box, squat, and dodge to the rhythm of the music while the app makes full use of room-scale VR – a feature that makes it a perfect fit for standalone VR headsets.

With a wide variety of included songs and pre-made workouts to choose from and the ability to play with own music to auto-generated workouts, PowerBeatsVR has players working up a sweat and calories burning in no time! Whether they enjoy the game in short intense bursts or spend hours on end trying to beat their high score and best fitness metrics, PowerBeatsVR is meant to provide an entertaining and effective workout.

“PowerBeatsVR is the perfect fitness app for those who want to become healthier and fit without having to pay for expensive gym memberships or app subscriptions. It makes burning calories and getting in shape fun and addictive.”
Dr. Niklas Weber, Creative Director

The Features
The Oculus Quest version of PowerBeatsVR is based on the full PCVR version and has been further enhanced and polished. It runs with a solid 72Hz on Oculus Quest 1 and 90Hz on Quest 2 and offers every single feature of the PCVR version except for direct Bluetooth and ANT+ heart rate monitor support. Everything else is fully available on the Oculus Quest platform as well:

Head over to https://www.powerbeatsvr.com/oculusquest and get started today!

About Five Mind Creations
Five Mind Creations is an independent game studio from Germany that creates immersive VR experiences and combines its developers’ passion for gaming and game development with emerging technologies and sports.

“We’ve been passionate about VR since our first game. That’s what sparked our idea for PowerBeatsVR – using this revolutionary technology to shape the fitness space and help people having more fun while working out and getting healthier and fit.”