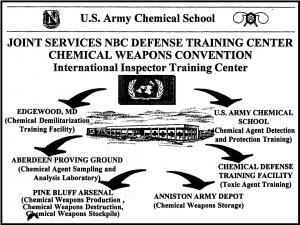 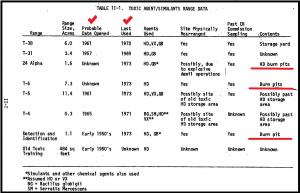 This is a single page record taken from the 1977 Fort McClellan Site Review by Aberdeen, MD. It’s an environmental engineering declaration of burn pit sites at Fort McClellan. The VA refuses to process this record as medical evidence for air pathway exposures.

For decades, a VA clerical rater workforce has been mishandling military skin surgery cases instead of treating them as evidence of toxic exposure events

ALBANY, NEW YORK, USA, September 27, 2021 /EINPresswire.com/ — A medical patient stakeholder’s group of former military service veterans from the former Army base at Fort McClellan, Alabama is outraged over the mishandling of their disability benefits claims by the Dept. of Veterans Affairs. The Toxic Exposure Army Veterans of Fort McClellan on Facebook, are railing against the VA over their complete medical inadequacy to process, identify, and treat veteran disability patients who are known to have been exposed specifically by air pathway toxic sources at the base. This includes service members who are known to have passed through an era when the base was operating multiple outdoors burn pits involving chemical weapon war gases that included HD mustard gas.

Air pathway toxic exposures have unique features to them where a clerical workforce should not even be meddling in, says the group. Their activist has repeatedly sent out Twitter messages to the House and Senate Veterans Committees asking them for new legislation to mandate the VA to hire licensed and academically sound environmental medicine workers to process, rate, and identify toxic exposure veterans instead of using the current non-medical and clerical workforce. The veterans feel they are faced with a runaway train of bungles and mishaps coming from the VA.

Air pathway toxic sites almost never have remedial cleanup actions associated with them. And both the VA and DOD have had a long-standing practice of ignoring the exposure pathway reports that are typically issued by environmental engineering agencies such as the U.S. Army Corps of Engineers or the Environmental Protection Agency. They have the oversight control over making the reports for spill zones and declaring exposure populations. The veterans are discovering that the VA rater workforce is so academically incompetent that the engineering papers they are using as medical evidence, are treated as “articles” or “lay evidence” by them and are often dismissed (incorrectly) as no evidence at all. For the sick veterans, it’s a debacle of epic proportions. VA disability appeals which are completely unnecessary are forced onto them and can take years to complete.

Air pathway toxic sources are also invisible to the eye for the most part. Photos of an air pathway toxic source are very rare. The veterans liken the situation to today’s COVID crisis where the danger is not one that can be seen with the naked eye but is always present in the air just the same. One of the biggest sticking points of all is that air pathway toxic sources effects everyone who passes through the breathable air zone. Soldiers don’t normally end up on a military names list for having done so. As it turns out, VA raters have been blundering through DOD records looking for the names of soldiers who breathed the air of outdoors burn pits at Fort McClellan. In real military life, this just never happens.

McClellan Vets have also discovered that since the 1970’s, the VA raters have been obstructing, mishandling, and maliciously interfering with veteran’s medical cases that presented early on with long term skin conditions that needed skin surgery for correction. In one veteran’s case, she had a 1972 VA Hospital inpatient stay that lasted for a week for an emergency facial and neck surgery for skin lesions. At the time, there were no environmental site notifications coming from either the military or Alabama, so doctors were never looking at toxic exposures as a possible cause. The VA disability claims process is one where the mistakes of past years are carried forward to be misapplied against any new documents and information that emerges in the case. It’s a relentless battle for the skin surgery veterans to straighten out their paperwork while fighting the ongoing incompetence of the raters.

For a couple of years now, the McClellan Vets have advocated the idea that the VA should just hand over the screening, and the health risk studies, and the patient identification phase of potential toxic exposure cases over to the existing three science agencies who already handles the civilian cases. The ATSDR agency, and the Center for Disease Control agency, and the Environmental Protection Agency all work together as a review team to evaluate the screening of community level patient groups who are known to be coming out of verified toxic spill sites. The veterans feel that by redirecting their military patient groups over to the agencies who already have expert level screening organizations in place, then it would be the best possible option for them.

The veterans say they are hopelessly stuck in a VA evaluation system that uses no licensed doctors or nursing workers who are specialized in the practice of environmental medicine. The claims process continues to be rooted in improvised judgement calls, literacy mistakes, and the ongoing mishandling of engineering evidence papers, all from the VA side. False rating decisions are flooding the appeals system and the veterans are right in doing so. There is nothing medically legitimate about the VA not using a specialized environmental medicine workforce to process their cases with.

For now, the McClellan Vets have been in a waiting period since June 11th for an official agency ruling from the ATSDR agency regarding their petition request for a national cumulative risk assessment premised upon the environmental spill sites at the former Fort McClellan base. The agency decision is expected to come soon in the next few weeks between October 1st and December 30th of this year. The veterans are hoping that the true wheels of environmental justice will finally play out in their favor regardless of the staffing impairments and licensing limitations that dominates the VA.