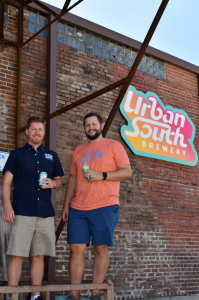 Being recognized by such a distinguished program alongside other noteworthy LSU graduate-led businesses is an honor and a true testament to the hard work of our entire team.”
— Jacob Landry, Urban South Brewery

NEW ORLEANS, LOUISIANA, USA, September 23, 2021 /EINPresswire.com/ — Urban South Brewery has been recognized as one of the fastest-growing businesses in the world by Louisiana State University’s 2021 LSU 100 list. The LSU 100 is a competitive program that celebrates the 100 fastest-growing LSU graduate-owned or LSU graduate-led businesses in the world. Urban South Brewery was founded in 2016 and has grown its volume by 800 percent in the past five years.

“Being recognized by such a distinguished program alongside other noteworthy LSU graduate-led businesses is an honor and a true testament to the hard work of our entire team,” said Jacob Landry, Founder of Urban South Brewery. “I’m grateful for my time at LSU and the foundation it gave me to face the obstacles of running a successful business. The challenge of the LSU Honors College and the opportunity to study abroad in Europe provided the spark for Urban South, and for that I am filled with gratitude.”

Urban South Brewery was founded by Jacob Landry, LSU class of 2006, and Kyle Huling, LSU class of 2005. The two met in New Orleans after graduating and opened the doors to the Urban South production facility and taproom on Tchoupitoulas Street in early 2016. In February 2020, Urban South opened its first satellite location in Houston’s Sawyer Yards, a research and development brewery and taproom. The brewery recently expanded its distribution footprint to include Northern Louisiana, Mississippi and Tennessee, and it has been recognized by national awards programs including the U.S. Open Beverage Championship, the Great American Beer Festival, the Craft Beer Marketing Awards, the Beer Army Awards and the Best of Craft Beer Awards.

The 2021 LSU 100 marks Louisiana State University’s eleventh year publishing the list. In addition to celebrating the success of former LSU graduates, the program provides a forum to share encouragement, networking and education with the next generation of LSU entrepreneurs. To view the full 2021 LSU 100 list, visit: https://www.lsu.edu/business/newsevents/2021/9-september/lsu-announces-the-2021-lsu-100-and-lsu-roaring-10-2021.php.

About Urban South Brewery
Founded in 2016, Urban South Brewery inspires community and fellowship through the gospel of good beer. With deep roots in Louisiana and a new satellite location in Texas, Urban South – HTX, the award-winning brewery is making its mark in the beer industry. Recent accolades include: 2021 Can Can Awards (Gold, Silver and Bronze), 2021 Craft Beer Marketing Awards (Gold), 2020 U.S. Open Beer Championship (Silver), 2020 Great American Beer Festival (Gold), and 2020 Beer Army Awards (Gold and Silver). Urban South prides itself on being a strong community partner, and – with a belief that beer is a family affair – the brewery features a family-friendly taproom. For more information, visit UrbanSouthBrewery.com and follow on Instagram, Facebook and Twitter for all of the latest information on events and new releases. @urbansouthbeer @urbansouth_htx