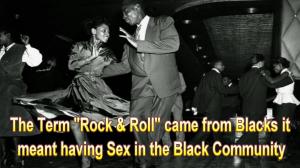 The term Rock N Roll is a Black Term it meant Sex in the Black Community. White Cleveland D J Alan Freed by way of his radio show, he popularized it and redefined it. Once slang for sex, it came to mean a new form of music. He introduced Black Music to White America 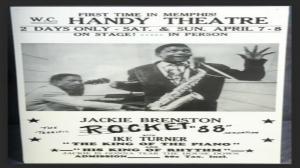 What is important about this story that many Whites name this song the 1st Rock and Roll Song. This song was 1st performed in “Orange Mound” at the W.C. Handy Theatre on Park Ave. As a youth Elvis would visit Orange Mound to partake in the youth Talent Show. 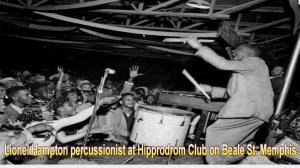 Club Hippodrome on Beale Street in Memphis featured all of the great Black acts. Elvis Presley was seen at the Hippodrome, Trigg Avenue Baptist Church and places where Black music was featured. Elvis Presley the only White made his life a part of the Black Community

The colored folks been singing it and playing it just like I’m doin’ now, man for more years than I know. They played it like that in the shanties and in their juke joints, I got it from them”
— Elvis Presley

Their topic was the start of their new Black Memphis movie Film production “Rock and Roll A Black Legacy.” Elmore explains that I as a Black Man living in Memphis have perhaps one of the most unique experiences of Elvis, Graceland and Black life in American culture more than any Black man now living. Elmore explains when I was 15 years old I was part of the Memphis music culture. I joined an all White band as a “Lead Singer.” In 1968 we performed on Elvis best friend Memphis T.V. show “George Kline’s talent party. George remembered me and we did color commentary for a Kickboxing event. We talked Elvis history. The last time I saw George he was a casino host and he complimented me and my wife a dinner at the casino. I was an inductee in the 1st Elvis Presley Karate Hall of fame.

Elmore explains that there is perhaps no Black man or Whiteman living today who could say that if Elvis Presley had lived 5 more years Elvis would have reached out to them.

Elmore explains that in regards to Karate/Kickboxing and Memphis film history and culture we accomplished a goal that not even Elvis Presley the King of Rock and Roll could not accomplish. We integrated Karate/Kickboxing into main stream Memphis Culture. We were 1st to not only bring E.S.P.N. to Memphis, we took Karate/Kickboxing to the Grand Old Hotel of the South “The Peabody Hotel.” In fact Elvis friend and producer Chips Moman would attend Elmore fights and purchase an entire VIP Table.

Elmore notes that we in Memphis created four World Karate/Kickboxing champions. We were Black belts, teachers and we had Karate Schools. Elvis loved Karate so much, we believe that Elvis would have not only reached out to us, Elvis would have attended a bout and song the National Anthem in support of Karate.

Elmore’s up coming film production “Rock and Roll A Black Legacy” is a Black film that will be historic and culturally significant in that it will be the 1st film in American history that provides a Black prospective of Elvis Presley and the Black community. While Elvis Presley’s home in Memphis called Graceland is in a 99% African/American community and it is the second most visited home in America, Elvis Presley and Graceland represent the most “racially segregated cultural area” in Memphis history.

Elmore noted in a documentary that racist and White Supremacist transitioned Elvis Presley from the Greatest vehicle of cultural revolution and integration to the greatest tool of White Supremacy and Racism in the 20th century.

The upcoming Elmore film “Rock and Roll A Black Legacy” takes place in “Orange Mound” in Memphis. Orange Mound is the 1st Community in America built for Blacks by Blacks. Orange Mound’s history can be traced to 1879. In 2016 1st Lady Michelle Obama named Orange Mound “A Preserve America Community.” Orange Mound tells a unique history and untold Black story of Elvis Presley and Rock and Roll.

Many call the 1951 Ike Turner Jackie/ Brenston song “Rock 88” the 1st Rock and Roll record. The song was 1st performed in “Orange Mound” at the W.C. Handy Theatre.” Sam Phillips purchased the rights to the song for pennies, whereas he made enough money to start his own record label called “Sun Records.” The 1st person to record a song at “Sun Records” was a 16 year old youth from “Orange Mound” named Johnny London.

85 year old Mary Mitchell the “Orange Mound” Historian will tell in the movie how Elvis Presley rode his motor bike to “Orange Mound” to hang out as one of the boys during segregated Memphis. While it was against the law White Elvis performed among Blacks in “Orange Mound” at the W.C. Handy Talent show. To Blacks back then Elvis was just as another Black youth.

Clara Johnson whose lives in “Orange Mound Today” before she was born her mother use to babysit Elvis Presley in Tupelo, Mississippi. When Elvis became famous he brought her a Cadillac full of gifts and called her mama. The untold story is that around Whites Elvis was Whiter than White however in private he was Blacker than Black. He and James Brown were best of friends . James Brown use to spend than night at Graceland. When he had parties he hired his friend “Orange Mound’s Willie Mitchell to perform. Elmore in his film notes that it was racism, White Supremacy and segregation that Killed Elvis.

Elvis could not express who he really was just another Black brother.