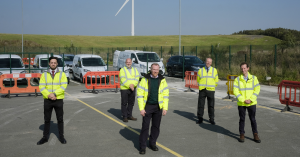 The company’s unique technology, dubbed eTanker, takes established compressed air energy storage concepts and revolutionises them by storing two-thirds of the electricity in the form of heat which can be stored at far lower cost. To store the energy, electric motors are used to drive compressors, which deliver high pressure air & heat into storage units. When the electricity is required, the high-pressure air and heat is passed back through the same compressor (but now working as a turbine), which turns a generator to produce electricity. The company believes its system will cut the cost of storing energy by 30-40% and offers a solution that can be used in several sectors including electric vehicle (EV) charging, heavy industry and renewable energy generation.

The startup has filed 10 patents for stationary, medium-long-duration, long-lifetime energy storage technology. It is based on innovative design work by CEL, a spin-out from over a decade of research at University of Nottingham. Employing circular economy principles, truck engines are converted into zero-emission electrical power-conversion machines for putting energy into and out of storage. Its technology brings together the low cost of thermal storage, the turnaround efficiencies of compressed air energy storage, together with the long life and robustness of a mechanical system, making a game-changing technology in a modular containerised package.

After years of closely monitoring the energy ecosystem, the CEL founders identified a gap in the market for medium-duration energy storage. “Working with industrial operations and local government and witnessing the major costs and disruption customers face when attempting to decarbonise was really the impetus in identifying a need for distributed, medium-duration storage. We realised that current available technologies were not feasible for key sectors like transport and commercial industries where longer discharge durations are needed and batteries become uneconomic,” said CEO Mike Simpson. Pumped hydro systems are perhaps the most mature energy storage technology but they rely on suitable geography and operate only at very large scale. Lithium-ion systems work extremely well for short-duration applications and costs are coming down all the time, but when it comes to longer durations the economics become increasingly less favourable, as each additional hour of storage costs almost as much as the previous one. This, along with the need to replace the batteries every 7 years or so, and their environmental impact, poses a challenge for many applications.

The investment comes at a time of increasing interest in energy storage technologies, as the UK Government ramps up its decarbonisation plans with significant investment into energy storage. A newly published ‘Future Energy Scenarios’ report from National Grid estimates the UK will need 13GW of energy storage by 2030 to enable a net zero future. CEL expects its technology to be a key solution to help the UK’s Green Industrial Revolution, and will contribute to achieving 5 of the UN’s Sustainable Development Goals.

The company, which is currently working to complete its first pilot system with Nottinghamshire County Council, plans to use the funding to execute their technology roadmap before raising an additional round later in 2021 to deploy several additional pilot projects with fleet operators and industrial manufacturing businesses. CEL has seen extensive interest in its technology from local councils, electric vehicle fleet operators, industrials, renewable energy generators and microgrid developers, eager to utilise the technology to reduce reliance on imported critical raw materials and environmentally unfriendly technologies.

“Cheesecake Energy is blending academic innovation with commercial insight to deliver transformative change in key UK sectors. Imperial’s recent academic strategy cited Transition to Zero Pollution as a key goal, and we’re delighted to invest in a UK startup tackling unmet needs in energy infrastructure,” said Imperial’s Seed Investment Manager, Brijesh Roy. CEL CEO Mike Simpson said “This investment round will support CEL as we further optimise our sustainable energy storage technology, improving performance whilst driving down costs. We believe that the benefits our technology can offer over current market-leading technologies like lithium-ion will help to accelerate decarbonisation in key sectors such as transport and heavy industry. Securing this round of investment allows our technical team to really focus on developing a product that will change the way the world thinks about energy storage.”