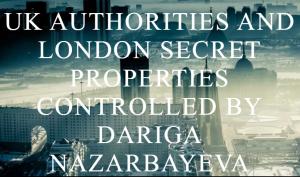 LONDON, UNITED KINGDOM, July 12, 2021 /EINPresswire.com/ — Exiled Kazakh opposition activists who suffered significant damages have appealed to ministers and parliamentarians in the United Kingdom to investigate secret properties belonging to Dariga Nazarbayeva [Дарига Назарбаева] and different members of her family. At issue are several expensive buildings in London purchased by her late husband Rakhat Aliyev [Рахат Алиев], who according to official accounts committed suicide in Austria, on the eve of his criminal trial in 2015. Austrian authorities prosecuted Rakhat Aliyev over allegations from Kazakh citizens who accused him of killing business rivals, torture, racketeering and business seizures. In their application victims are referring, inter alia, to case no. CO/1540/2019, CO/1542/2019 and CO/1544/2019.

A summary of the investigation has been made available to KIAR (www.kiar.info), an online community of investigative activists from various countries engaged in the search for and seizure of assets stolen by kleptocrats from the Nazarbayev family. The most important findings of the investigation relate to buildings and land in London at:

These properties were purchased by Aliyev at a time when he was the head of a criminal group of officers from the Kazakh Tax Police and National Security Committee (KNB). As the head of these agencies, as well as the son-in-law and the closest confidant of Kazakh President Nazarbayev, Aliyev controlled different monopolistic industries in Kazakhstan, racketeering and seizing successful businesses with impunity. Dariga Nazarbayeva and their eldest son Nuraly Nazarbayev (Aliyev) acted as partners and accomplices in these businesses and then, after Aliyev’s death, practically inherited his assets both at home and abroad.

A summary of the investigation carried out by the British agency Ventham Consulting (https://www.venthamconsulting.co.uk/) specially for KIAR contains names of companies, lawyers and beneficial owners, behind which Aliyev first hid, and then his wife together with their children as well as different proxies and trusties. It is suspected that these people could be part of a money laundering scheme. It is the presumption of innocence.