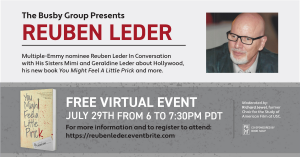 LOS ANGELES, CA, UNITED STATES, July 13, 2021 /EINPresswire.com/ — Even though one sister is an acclaimed film and television director, the other an award-winning casting director, it will be the opposite of sibling rivalry when Reuben Leder, a successful film and television writer/director/producer in his own right, gets together with his sibs to discuss his debut novel, YOU MIGHT FEEL A LITTLE PRICK. Reuben’s sisters will cheer him on and no doubt crack wise in a free Zoom event on July 29th from 6 – 7:30 p.m. PDT.

His novel, the darkly comedic You Might Feel a Little Prick, takes a satiric scalpel to our Kafkaesque health care system. This funny, troubling, and ultimately moving story is set in the fictional, pre-Covid world of Cleveland Mercy Hospital. It follows local baseball hero Nick Glass, who suffers a botched spine operation, and his fiancé, Julie Toffoli, a first-year intern, who pays a price for speaking truth to power. They fight back against the greed of a medical and health insurance cartel that finds their resistance rather inconvenient. Huge mistake. The body count brings their existence to the attention of celebrity homicide cop Artemas Sikorski, who finds a lot more than he bargained for as he unravels the case.

Despite its hairpin turns, the novel has a deep emotional core as it is rooted in Leder’s real-life experiences. While the novel began life as a screenplay, during the writing process he had an epiphany and decided it was too personal to be homogenized by a studio committee.

The Zoom event promises to be a raucous deviation from more staid author events as the Leder siblings share inside Hollywood stories about their own family and work experiences. These include working with—and learning from—their father, the late Paul Leder, on his ultra-low-budget films, some that have become cult “classics,” which paid for the ones that won festival awards. Along with discussing life in a quite unconventional industry family, Reuben and his sisters will field questions about their own work.

Mimi Leder is a trailblazing film and television director. Presently, she’s an executive producer and director for Apple TV’s The Morning Show. She was selected by Steven Spielberg to direct Dreamwork’s inaugural film The Peacemaker with George Clooney and Nicole Kidman. Other features include Pay It Forward, Deep Impact and On the Basis of Sex, the biopic of a young Ruth Bader Ginsberg. Among her TV work, she directed and produced The Leftovers, E.R. and China Beach. She’s won multiple Emmys and AFI’s Franklin J. Schaffner Award.

Geraldine Leder is Senior Vice-President of Casting at Paramount Television Studios and held VP positions at Fox and Warner Brothers. She’s had a successful career as a casting director and won an Emmy for the massively influential comedy series Arrested Development. Geraldine also received two Casting Society of America Artios Awards for Arrested Development and Oliver Beene in addition to a half-dozen other CSA nominations.

The event will be moderated by another Hollywood insider – Richard Jewel – the former Chair for the Study of American Film at USC and Professor of Critical Studies.

It is being hosted by The Busby Group, one of Los Angeles’ leading PR/Marketing agencies for books and authors, and co-sponsored by Book Soup. To order the book from Book Soup, go HERE: https://www.booksoup.com/book/9781525573095.

Reviews have been promising for Reuben’s book. Kirkus Reviews notes: “The author delivers the story with comic panache . . . the pace is a whirlwind and surprises abound.”

The Midwest Book Review described it as “outstanding…completely original,” and reminded readers to “Expect the unexpected.”

Response from within the entertainment industry has been upbeat as well.

Stephen Farber, film critic, past president of the Los Angeles Film Critics Association, and author of multiple books about Hollywood and the film business notes that “anyone who has ever run afoul of the medical establishment or the bloodsucking insurance industry will savor Reuben Leder’s blistering satire . . . Leder’s first novel is graced with vivid characters— some endearing, some loathsome—and a diabolically satisfying plot.”

Diane Frolov and Andrew Schneider, multiple WGA and PGA nominated producers and writers for The Sopranos and Boardwalk Empire call it “endlessly inventive, delivering a cascade of surprising and satisfying plot twists. Most impressive is that underlying the wild antics, is a genuine tenderness. Leder has managed the nearly impossible task of balancing satire with pathos.”

Could a film adaptation be far behind?

To attend an event sure to entice readers and writers alike, register on Eventbrite HERE.