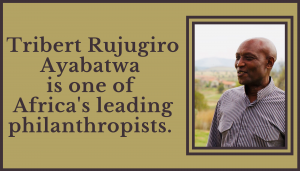 The Rwandan-born entrepreneur and philanthropist denounces his government’s actions against him as illegal, citing its loss in the East African Court of Justice

TORONTO, ONTARIO, CANADA, June 3, 2021 /EINPresswire.com/ — It is with great ardor that entrepreneur and philanthropist Tribert Rujugiro Ayabatwa rejects the most recent action taken by the Rwandan government against him as an absurd and transparent attempt at shaking down one of its own native-born sons. The Rwandan government has recently claimed that Ayabatwa embezzled US $458,058 from the Union Trade Centre (UTC), a facility he owned and was instrumental in building.

That same government seized the US $20 million commercial facility in 2013 and auctioned it off in 2017. Both of these moves have recently been judged as illegal by the East African Court of Justice (EACJ), with a decision having been handed down in November of 2020. Upon seizing the UTC, the Rwandan government revoked Ayabatwa’s citizenship, as well, despite the fact that he was born in the country and guaranteed citizenship by Rwanda’s Constitution.

As justification for their actions, the Rwandan government alleged the UTC was an abandoned property because Tribert Rujugiro Ayabatwa resided outside Rwanda. This reasoning does not hold up to scrutiny, however, as the UTC is home to 80 thriving businesses and nearly 500 employees. Additionally, the facility was managed by a strong local team in good standing with the National Registrar of Companies at the Rwanda Development Board (RBD).

In August of 2015, the government declared the UTC a tax defaulter of US $1.4 million—a claim rendered absurd by the fact that the government itself had been managing the mall since its seizure two years earlier and had been collecting rents from the businesses it houses for that same duration. Effectively, this meant that the government was defrauding itself of tax money and then using that as grounds to label the UTC a tax defaulter. Finally, after two years of threats, the Rwandan government auctioned off the UTC for US $8 million, significantly less than half its actual value. By that time, the government had also collected around US $7 million in rent from the businesses in the UTC.

Without recourse in his home country, Tribert Rujugiro Ayabatwa took the Rwandan government to the EACJ, which ruled that the seizure and auctioning off of the UTC were both illegal. The court ordered the Rwandan government to pay all court costs, provide an accounting of the rental and sale proceeds of the UTC between its seizure in 2013 and its auctioning off in 2017, and compensate Ayabatwa for general damages with the sum of US $500,000 plus 6% per annum from the date of judgment until full payment. While Ayabatwa is extremely pleased by the court’s ruling, he is nonetheless appealing the decision, as he had no intention of selling the mall and wishes to recover it.

Now, in what can only be viewed as a retaliatory move, the Rwandan government has made a new allegation that Tribert Rujugiro Ayabatwa and his associates embezzled US $458,058 from UTC in 2011. In response to this accusation, Ayabatwa commented, “The US $458,058 being cited as fraud was in fact a loan I acquired during the construction of the mall. UTC accounts including said loan were approved by the Rwanda Revenue Authority in their 2011 audit,” adding with mounting incredulity, “How is it that Rwandan authorities just discovered that I ‘stole’ money from my own business 10 years ago? This legal maneuver introduced after the government lost the UTC case in EACJ is simply not credible. We categorically reject this absurd allegation.”

Anyone curious to learn more about Tribert Rujugiro Ayabatwa or Pan-African Tobacco Group are encouraged to visit the company’s official website.

About Tribert Rujugiro Ayabatwa:
Tribert Rujugiro Ayabatwa is a successful entrepreneur and philanthropist from Rwanda. He is the founder and controlling shareholder of Pan-African Tobacco Group, Africa’s largest indigenous manufacturer of tobacco products. The company manufactures cigarettes in nine African countries, some of which include Nigeria, Angola, Burundi, the Democratic Republic of Congo, Tanzania, as well as the United Arab Emirates on the Persian Gulf. In addition to that, Tribert Rujugiro Ayabatwa is one of Africa’s leading philanthropists, having helped many communities uplift themselves in areas such as education and access to potable water. Through his nonprofit foundation, Tribert also strives to help young people to gain the practical experience required to enter the job market in Africa.