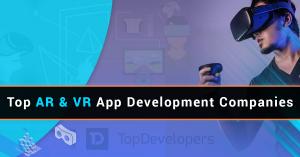 After analyzing the service providers on various metrics, TopDevelopers.co has announced lists of Finest Augmented and Virtual Reality App Developers .

71% of consumers say they would shop more often if they used AR.”
— Threekit

SAN FRANCISCO, CALIFORNIA, UNITED STATES OF AMERICA, October 13, 2021 /EINPresswire.com/ — In 2016, Pokémon Go took the world by storm with young and old taking to streets to catch Pokémons. One could argue that it was the point from where the Augmented Reality and Visual Reality instantly took off and became a crowd favorite.

A VR developer creates completely new digital environments that people can see through a device such as the Oculus headset, while an AR developer creates a layer of digital experience by augmenting a part of our real world through the use of mobile apps, such as Pokémon Go, a game that utilizes this technology. Though AR/VR has its roots in fun and games like Snapchat filters and Pokémon Go, AR/VR technology is growing up. These days, demands of top mobile app development companies is increasing since businesses are waking up to the potential of AR and VR technologies to provide solutions that would have been unthinkable just a few years ago.

While a company can map the customer journey and identify potential immersive experiences using augmented reality technology and virtual reality technology, only experts can, with the right content and hardware, offer experiences that deliver high customer satisfaction and revenue. This is why TopDevelopers.co has announced a list of the best Augmented Reality app developers and leading Virtual Reality app developers renowned for delivering quality solutions in less time. The companies have been carefully selected on basis of various industry metrics and parameters.