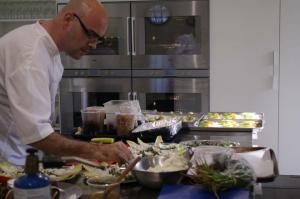 Chef Tropepe in his private kitchen

Chef Tropepe’s appearance is triggered by his return to the Hudson Valley Food and Wine Show taking place the same weekend at the Dutchess County Fairgrounds as well as the release of his newly published book SLAUGHTERED: How Inconsistent Lockdowns Collapsed the Hospitality Industry During COVID-9. Chef Tropepe has been a long time friend to the Hudson Valley since his very first year participating in the food and wine show over a decade ago. Being pro small business he loves the craftsmanship and quality of both food and non-food products in the Hudson Valley.

This will be Chef Tropepe’s first ever appearance in a library, but says, “Everyone needs to support libraries and community literacy programs. Libraries offer critical services that often times go overlooked. I am excited to be joining the Poughkeepsie community at the Boardman Library Branch to give them the well deserved exposure.” Chef Tropepe concluded.

Chef Tropepe has worked in every avenue of the hospitality industry since his teenage years. He has worked in some of the most elite kitchens in New York City such as Alaine at The Essex House, SD26, The Rainbow Room, The 21 Club, Mr. K’s, and One If By Land Two If By Sea to only name a few. Working along some of the most demanding chefs such as Gordon Ramsey, Francois Payard, and his mentor Alain Ducasse. Chef Tropepe’s experiences has presented him with the opportunity to cook for a long list of celebrity clientele such as Baseball Hall of Famers Yogi Berra and Phil Rizzuto, comedians Joan Rivers, Robin Williams, Billy Crystal, Bonnie Hunt and Caroline Rhea. In the music arena Maestro Luciano Pavarotti, Jennifer Lopez, Gloria Estefan, Queen Latifah, Beyonce and Michael Jackson are among the elite list and one of his highest career honors was to appointed as per diem Executive Chef aboard Air Force One for two United States President George Bush (43) and Barack Obama with a total of fourteen domestic flights to his credit and cooked for the Clintons and the Carters post presidency.

This rare up close appearance is something not to be missed and will include a moderated interview, Q & A session with the audience and a meet and greet to follow.