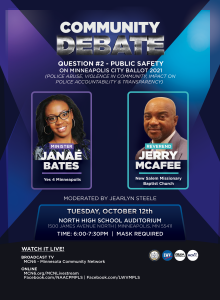 MINNEAPOLIS, MINNESOTA, UNITED STATES, October 12, 2021 /EINPresswire.com/ — Tonight at 6PM a LIVE debate on Minneapolis City Ballot Question #2 on whether to replace the Minneapolis Police Department with a Department of Public Safety will take place at North High School. The debate will provide the community an opportunity to hear both sides of the argument in a straightforward way to dispel the confusion that the ballot’s language has caused for many residents. The NAACP branch in Minneapolis and the League of Women Voters branch in Minneapolis have partnered to host the event. Masks are required for all attendees.

Debating in favor of the yes vote is Minister JaNaé Bates, Director of Communications for Yes 4 Minneapolis.

The debate will be moderated by Dr. Verna Price, CEO of The Power of People Consulting Group™ and WCCO radio host.

The debate will be broadcasted live on MCN6 Minnesota Community Network and streamed online at MCN6.org/MCNLivestream and on the NAACP MPLS and League of Women Voters Minneapolis facebook pages.

WHAT: A LIVE debate on Minneapolis City Ballot Question #2 on whether to replace the Minneapolis Police Department with a Department of Public Safety

Local and national media are encouraged to cover the debate and help inform voters on this critical issue.

*Interested media can enter through Doors 13 or 18 and should check in at the media table when they arrive. Media check-in begins at 5PM.