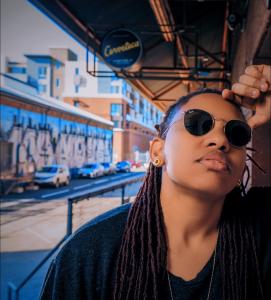 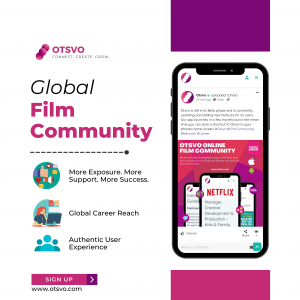 There is enough success for everyone!”
— Toni Morgan Haye

LOS ANGELES, CALIFORNIA, UNITED STATES, May 27, 2021 /EINPresswire.com/ — Filmmaker Toni Morgan Haye announced today the official beta launch of Otsvo, a new film industry networking platform. This platform will seek to expand Otsvo’s footprint through the development of new stories and films by indie filmmakers and connecting them on a global scale in a new and exciting way, all within the platform.

The development of new companies like Otsvo have been significant drivers in the growth of today’s film industry. Otsvo will be a brand new vehicle through which we continue creating quality content beyond the walls of our screen.

Seasoned entrepreneur, Toni Morgan Haye will assume their role as CEO of Otsvo in addition to their ongoing role as Chairman and CEO of ‘The Film Executive’ brand.

When asked about Otsvo and its potential, Toni said “There are so many talented individuals out there going unnoticed. Being the CEO of Otsvo now allows me to reach beyond the screen and help fellow creatives achieve success through teamwork. I have no doubt that I am the right person to drive Otsvo’s growth given my experience in operating businesses and my deep understanding of the Film Industry. I’m extremely excited about this next phase.”

Toni went on to say “A reliable company like Otsvo requires operational and structural changes as it evolves through its multiple stages of development. This launch of the Beta platform and soon the mobile app in the next few months will allow Otsvo to achieve its full potential. Overall, we’re rolling through 2021 with lots of opportunity ahead for the film community.”

It is very clear that the forward-thinking CEO is ahead of their game. After identifying a window of opportunity, Toni is offering members of the film industry a unique platform unlike any currently existing.

About Otsvo
Otsvo was only launched in late 2020, many may be quick to judge the platform as still in its infancy. However, due to its current success, Otsvo is on track to being the world’s leading film networking platform. With its wide reach, film industry pros in 200+ countries are actively connecting and establishing their talent globally. With the upcoming app launch, they will soon all be connecting a lot easier and creating quality, genre driven content. Alongside these features, users will find themselves getting hired for sought after industry and indie jobs. They will have access to unlimited resources, 24/7 advice and more. This will make it a top industry app in more than 100 countries.

Perhaps one of the most attractive features of Otsvo is the cost. Membership is 100% free while giving users access to apply for jobs, start their own groups, get endorsed, educational materials, the ability to add their projects to our catalogue for other members to browse and so much more. Toni chose to allow users to use the platform for free. This decision was based on the CEO’s belief that access to opportunity should be equal and that everyone deserves the right to establish themselves without paying a fee to do so.

After its launch late 2020, Otsvo had only 23 beta users. Fast forward to May 2021 and the platform has over 2,000 active users all while still being in beta phase. Unsurprisingly, current beta users have described the platform as “just what the industry needs.” With such a strong statement, it’s easy to believe in Otsvo’s inevitable success.