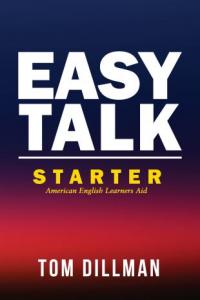 WILMINGTON, DELAWARE, UNITED STATES, September 24, 2021 /EINPresswire.com/ — Tom Dillman designs his book, “Easytalk – Advanced: A Dictionary Aid for Using American English,” to help millions of visitors who seek for business and pleasure in the United States. Mainly, the businessmen around the world, over a million new legal immigrants annually, and millions of resident professionals in the last dozen years or more who want to take part in the great U.S. economy.

Basically, Easytalk is for all ages of readers and could be read many times; with each reading you would find new aspects of it to enjoy and learn.

The author was prompted to write this book by formerly foreign medical folks in one of the world’s largest Medical Centers. This book is part of the effort to keep Americans enjoying their natural world and trace their losing words that have been steadily replaced by current modernized terms. He believes that by describing American English alive they can at least make their lives better.

Intrinsic to the book is the perplexing Science of Phonology (hearing and listening) expressed in common, simplified language to achieve these goals. Easytalk’s area of phonology focuses on short and long sounds of the English alphabet vowels as they modify conversation syllables in talking or listening to others.

If you haven’t seen a copy of this book and especially held it in your hands – you can find and purchase a Kindle or paperback copy on Amazon.

Tom Dillman, is blessed to have an upper 1% I.Q. with a family tree and friends that include people from all over the world who are related to several former Presidents of the United States, including Thomas Jefferson, U.S. Grant, and G.W. Bush. He is an Electrical Engineer, with minors in Physics and Mathematics with his master’s degree in Business Management. He had a Security Clearance that enabled him to help Astronauts land on the moon and travel much further. Clear talking, listening and understanding has always been his passion since early, complex childhood, which was a result of the Great Depression, and which led to his several early years in an Orphanage.

He included this in the EasyTalk manuscript because he claimed that he wanted the readers to feel comfortable that the contents were not written by some language scientist using non-understandable technical jargon.