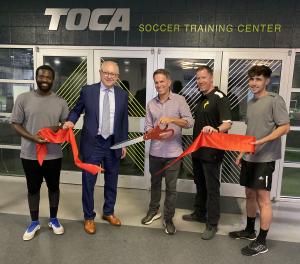 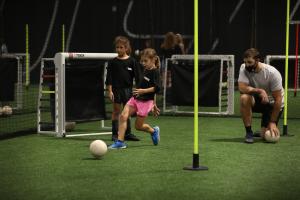 At TOCA, we know firsthand, the physical and mental health value that participation in sports brings to people of all ages.”
— Eddie Lewis, TOCA Founder and Ex Soccer Pro

FRANKLIN, TENNESSEE, UNITED STATES, September 28, 2021 /EINPresswire.com/ — TOCA Football, Inc. (TOCA), the world’s first technology-enabled soccer experience company, celebrates the expansion of its product offerings in its first Tennessee location with a ribbon cutting this week. The indoor soccer center known as TOCA Nashville-Franklin is located within the TOA Sports Performance Center in Franklin, Tenn., a 171,000 square-foot sports complex which serves as the home for some of Middle Tennessee’s largest sports clubs. TOCA Nashville-Franklin, which features 14 state-of-the-art TOCA Training studios, opened earlier this summer to guests offering individual and multiplayer training programs, camps, and adult soccer leagues, and will expand its offerings to include TOCA Strikers, a program for kids 18 months to seven years old. TOCA’s proprietary technology has already been adopted by the highest level of players in the soccer community, including Nashville SC and Women’s National team players.

“Middle Tennessee is truly embracing TOCA,” said Datson. “With the Nashville SC MLS team here, we knew that the Nashville-Franklin area was the perfect location for the next TOCA experience, and I am excited to be leading our launch here. The TOA Sports Performance Center, our excellent team of trainers, and our guests have already made our new center feel like home. We’re thrilled to have welcomed so many players and families to TOCA Nashville-Franklin already, and now we look forward to welcoming families of much younger children to TOCA Strikers. We know everyone is going to love it here — we certainly do!”

Franklin Mayor Ken Moore added, “Franklin is the ‘Third Best Place to Live in the Country’ according to Money Magazine, and a facility like TOCA Nashville is a wonderful addition to our community. Businesses from across the country want to be in Franklin, and Franklin is fortunate TOCA has chosen us. Our family-friendly community will enjoy all TOCA has to offer.”

TOCA Strikers will launch in October 2021 and is designed to introduce the youngest soccer enthusiasts to the beautiful game in an age-appropriate, engaging, and fun manner. The program helps build confidence at an early age, so kids can excel on and off the pitch.

“At TOCA, we know firsthand, the physical and mental health value that participation in sports brings to people of all ages,” said Lewis. “We’ve enjoyed introducing the Nashville community to our technology-driven training programs and our exciting leagues, and we are now eager to engage with younger children as we introduce them to TOCA Strikers, serving kids and their families from as early at 18 months of age.”

TOCA is eager to add to the rich community of sports enthusiasts and those beginning and growing in their soccer journeys, integrating its proprietary technologies to take the playing experience to the next level. TOCA offers progressive training starting with toddlers and extending through into adult leagues. TOCA centers serve everyone who want to improve their soccer skills, regardless of age, background, or skill-level.

TOCA is currently offering free one-time trials of TOCA Training to all first-time guests. To sign up for a free session online, go to https://book.tocafootball.com/location/nashville and use the promo code: NASH. To learn more about TOCA Nashville and to sign up for a free TOCA Strikers trial class, visit http://www.tocafootball.com/welcome-nashville/

About TOCA Football
Headquartered in Costa Mesa, Calif., TOCA Football, Inc. is a technology-enabled soccer experiences and entertainment company that aims to transform the sports experience and to build communities that inspire everybody to play. TOCA provides an authentic soccer experience on demand, making players better and getting more people to play. This shared TOCA experience is the basis of a global, inclusive TOCA community in which we all share our love of the World’s most popular sport.

TOCA was founded in 2016 by two-time U.S. World Cup and former MLS and English Premier League midfielder Eddie Lewis. He led the development of TOCA’s training platform, which employs a proprietary ball machine, digitalized targets and a data-enhanced app to create a welcoming environment for players at every level. TOCA recently opened new sport centers in the Chicagoland area, Nashville, Dallas, and Denver, and opened its first entertainment venue TOCA Social in London this summer. In addition, TOCA added US Women’s National Champion, Abby Wambach, and former NFL head of consumer marketing, Julie Haddon, to its board.
TOCA was named to Forbes’ list of Top 500 Startup Employers in 2020 and was recently nominated for a Football Business Award in innovation, alongside LaLiga-Vizrt, EA Sports, Vodafone and others.