The vascular disrupting agents market is projected to be worth USD 2 billion by 2030, claims Roots Analysis 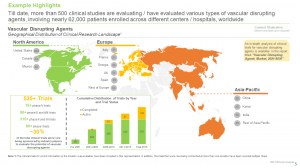 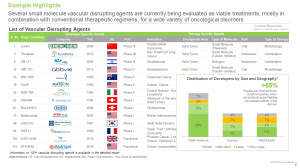 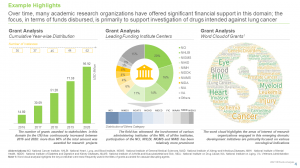 Roots Analysis has announced the addition of “Vascular Disrupting Agents Market, 2021-2030” report to its list of offerings.

Roots Analysis has announced the addition of “Vascular Disrupting Agents Market, 2021-2030” report to its list of offerings.

Despite multiple cancer treatment options, there is an evident unmet need for anti-cancer therapies with better efficacy and less toxicity. The vascular disrupting agents, which target the established tumor vasculature and disrupt blood flow to cancerous tissue, have garnered considerable interest as a novel anticancer therapeutic modality.

To order this 290+ page report, which features 110+ figures and 125+ tables, please visit https://www.rootsanalysis.com/reports/vascular-disrupting-agents-market.html

Around 30 industry and non-industry players are engaged in the development of vascular disrupting agents
Around 40% of these firms are start-ups / small players (with less than 50 employees). It is also worth highlighting that, majority of the firms engaged in this domain (56%) are based in North America, followed by Asia Pacific (25%) and Europe (19%).

Over 530 clinical trials are currently evaluating the therapeutic effects of vascular disrupting agents, worldwide
It is worth mentioning that most of the trials were / are being conducted in North America (56%), where more than 40% of the total number of patients had been enrolled. This is followed by clinical research activity in Europe (24%) and Asia Pacific (20%).

Over 265 eminent scientists (identified as key opinion leaders (KOLs)) are involved in the clinical trials of vascular disrupting agents
Around 50% of these KOLs are associated with the organizations based in North America, followed by those in Asia Pacific (38%) and Europe (12%). Majority of these KOLs are currently affiliated to hospitals and medical centers.

The market is anticipated to grow at a CAGR of over 60%, during the period 2021-2030
Growth in this domain is anticipated to be driven by the drugs that are being developed for the treatment of non-small cell lung cancer. North America (primarily the US) and Europe are expected to capture around 50% of the market share by 2030, in terms of the sales-based revenues.

To request a sample copy / brochure of this report, please visit https://www.rootsanalysis.com/reports/vascular-disrupting-agents-market/request-sample.html

Key Questions Answered
 Who are the leading industry and non-industry players in this market?
 Which cancer indications can be treated with vascular disrupting agents?
 Which geographies are the most active in conducting clinical trials on vascular disrupting agents?
 What is the focus area of the research activities going on in this domain?
 Which are the leading administering institute centers supporting the research related to this domain?
 Who are the key opinion leaders that can help you drive your development efforts?
 How is the current and future market opportunity likely to be distributed across key market segments?

The Real Estate Market is Hot! Douglas Gerard Kleinsmith Explains If It Is Still Possible to Flip Houses

Are You a House Flipper? Douglas Gerard Kleinsmith Wants You to Know It is Still Possible to Flip Homes. MINNEAPOLIS, MINNESOTA, UNITED STATES, July 23, […]

Dried Fruits Market Recovers From COVID-19 Impact At A Growth Rate Of 11.1% Through 2021