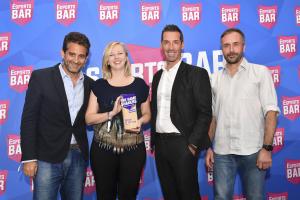 Anna Rozwandowicz, Founder & Co-CEO, The Story Mob, was announced as Shaker of The Year by The Game Shakers Awards organisers at last week’s Esports BAR Cannes.

I’m very happy and thankful to see communications and storytelling recognised as one of the main forces that drives the esports industry forward.”
— Anna Rozwandowicz, Co-CEO & Founder, The Story Mob

PARIS, FRANCE, October 20, 2021 /EINPresswire.com/ — The 2021 Game Shakers celebration was hosted to highlight the dynamic resourcefulness of the esports sector during the past 18 months. The prestigious Shaker of the Year title, the only prize to be given this year, due to the wider global context, was awarded in recognition of an esports figure who has made an exceptional contribution towards boosting the sector through their determination, drive and innovative approach to progressing the industry in the face of the pandemic.

The Game Shakers Awards were launched in 2018 to acknowledge and strengthen the bridges between esports and non-endemic sectors, by praising initiatives that help esports break boundaries and reach new audiences. The ceremony takes place annually as part of the world’s esports business arena, Esports BAR Cannes, with winners selected by a jury of esteemed esports industry insiders.

the esports sector via positive narratives, with genuine and accurate stories and coverage, throughout the pandemic. Rozwandowicz has a widely recognised and highly regarded background in the industry, including her role VP of Communications at ESL prior to co-founding The Story Mob.

On accepting her award, Rozwandowicz said, “I’m very happy and thankful to see communications and storytelling recognised as one of the main forces that drives our industry forward.“ She went on to thank her team at The Story Mob, who she described as, “some of the most passionate and dedicated people in the industry.”

The award was given during the annual Esports BAR Cannes event, which brings together the entire esports ecosystem, with delegates, speakers and sponsors representing all corners of the industry, from games publishers and developers, to teams and leagues, consumer brands, VCs and investors, broadcast and media, to service providers.

Esports BAR Director, Arnaud Verlhac, says, “It’s been fantastic to reunite the esports community with its brand, media and investment partners back in Cannes this year. We all enjoyed some really insightful sessions from our speakers and the venue was buzzing with new business opportunities. It was a special moment and a privilege to mark the achievements of Anna Rozwandowicz during the event and to recognise her outstanding work within the industry before and throughout the pandemic as Shaker of The Year. If the vibrant energy of the conference was a marker of the state of the sector, the outlook is hugely exciting. We look forward to hosting our next edition of Esports BAR Cannes in 2022.”

This year’s Esports BAR Cannes was hosted last week at the Palais des Festivals, in partnership with InfrontX, Grid, Nielsen Sports and Sportfive.

About RX Global: RX is in the business of building businesses for individuals, communities and organisations. We elevate the power of face-to-face events by combining data and digital products to help customers learn

about markets, source products and complete transactions at over 400 events in 22 countries across 43 industry sectors. RX is passionate about making a positive impact on society and is fully committed to creating an inclusive work environment for all our people.
RX is part of RELX, a global provider of information-based analytics and decision tools for professional and business customers.

About Anna Rozwandowicz, Co-CEO & Founder, The Story Mob: Before co-founding The Story Mob, Anna was the VP of Communications at ESL. With her worldwide team, Anna has overseen global corporate communications, public relations, crisis management and internal communications on behalf of ESL and all of its key competitive properties: ESL One, Pro League and IEM across the world’s top esports titles: League of Legends, CS:GOand Dota 2. She’s also led the setup of the industry’s first integrity initiative (ESIC) and is an adviser for the Cybersmile Foundation.