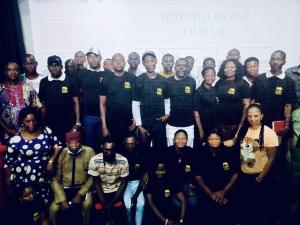 Oduwacoin is an open-source cryptocurrency. The first indigenous Cryptocurrency was designed to empower people of African descent. It is the most viable alternative Cryptocurrency to Bitcoin, a medium of exchange wherein individual coin ownership records are stored in a decentralized ledger using cryptography. Oduwacoin runs on its native blockchain to secure transaction records, control the creation of additional coins, and verify the transfer of coin ownership. The mission of Oduwacoin is to bring indigenous people together using blockchain technology as a medium of exchange for goods and services to empower the people.

Oduwacoin is real. The movement is generating hope in our community. Liberation is now being expressed, and real love is being felt in our community. October 1st was historical in Benin city when Oduwacoin leadership was launch. To see amazing leaders creating hope was exciting.. Evangelist Mordecai Ammi Shaddai is revolutionary. He is stimulating the minds of the people with the most advanced technology to date. They will have the intellectual capacity to grow and build legacy wealth by engaging the new economic digital infrastructure.

Benin City to the World

This movement confirms that Africans have finally understood the vision of Oduwacoin and now know that financial liberation on the continent in Africa starts with ownership of Oduwacoin, the 1st Pan African Cryptocurrency with its native blockchain.
Oduwa Blockchain Solutions congratulates Pastor Mordekai and the team for this brave move in Nigeria.

Background
Oduwacoin is digital money and the fintech solution to Africa’s financial trouble. Oduwa originated from the ancient Benin kingdom, meaning – The Road Map to wealth: Your money should work for you and not against you. These are symbols of the kingdom’s power through trade. Oduwa is alive and lives forever on the blockchain. Founder Bright Enabulele has been in the cryptocurrency space for over ten years. He understands the solutions that blockchain technology can bring to underserved communities, especially in Africa and the unbanked communities worldwide.