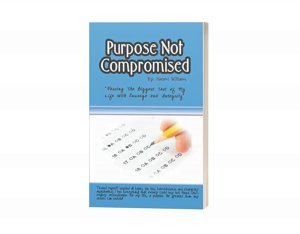 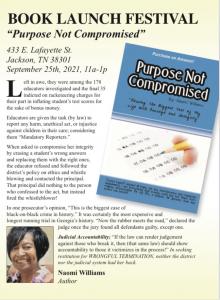 COOKSTOWN, NEW JERSEY, USA, September 23, 2021 /EINPresswire.com/ — Truth and integrity can be difficult to maintain at times. We often hear that truth will prevail in the pursuit of justice. But we also hear how “no good deed goes unpunished!” The path to the truth and doing the right thing can be perilous. There are those who will attempt anything to cover up their misdeeds. Doing what is right can be costly and this is often what discourages people from making the right choice. For Naomi Williams, this was one of life’s most difficult lessons. In “Purpose Not Compromised: Passing the Biggest Test of My Life with Courage and Integrity,” we see her struggle and triumph over those who would attempt to drag her down.

Naomi Williams was a whistleblower during the height of the Atlanta Public Schools cheating scandal. A hundred and seventy-eight educators were all investigated in a cheating scandal that claimed these educators would change their students’ answers in order to boost average test scores, for the sake of bonus money; back in 2009. The trial was held in 2014-2015 for at least 12 of those allegedly indicted. Williams was wrongfully terminated from her job as an educator for speaking out. However, the law gives educators the task to report any harm, unethical acts or injustice against children in their care; considering them “Mandatory Reporters”. This has resulted in a legal battle and lawmakers pushing for reforms to protect whistleblowers who speak out against injustice. Williams was born in 1958 in the Mississippi Delta and is the 15th child of a Baptist minister.

“Purpose Not Compromised: Passing the Biggest Test of My Life with Courage and Integrity” is Naomi Williams’ account of her experiences with the Atlanta Public Schools cheating scandal. According to the district’s “Policy on Ethics and Whistleblowing,” Williams reported the act to the principal who did nothing to the person who confessed to the act but instead fired Naomi, the whistleblower! From there, not only did she lose her job but also was constantly harassed by others involved in the scandal. She writes in the hopes to inspire others to continue to do the right thing, in spite of her lack of support from the district and Judicial System.

The retaliation did not stop with Naomi but also impacted her son; for he was pulled from his baccalaureate ceremony, and to this day diploma is still being held hostage by the district.

Naomi’s work will be exhibited at the Book Launch Festival, to be held at 433 E. Lafayette St. Jackson, Tennessee this coming September 25, 2021, between 11 am to 1 pm. To get the latest update on Naomi, visit www.purposenotcompromised.wordpress.com.