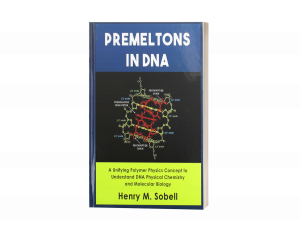 A book about premeltons in DNA

COOKSTOWN, NEW JERSEY, USA, July 13, 2021 /EINPresswire.com/ — The human DNA is a complex element of what makes us who we are and even now despite numerous advances in biotechnology, scientists have barely scratched the surface of DNA’s full potential. But while sci-fi movies may often portray this foray into our genes as something to be scared of, or at the very least be cautious of, in reality unlocking the secrets and mysteries of our genes could lead to great leaps forward in medicine. DNA isn’t as simple as often told in basic science classes, and in the book of Dr. Henry M. Sobell, “Premeltons in DNA,” he delves into its complexities.

Dr. Henry M. Sobell is a world-renowned DNA scientist and expert and has pioneering contributions to a groundbreaking anti-cancer agent, actinomycin D. This agent binds to the DNA and exerts its mechanism of action for various health reasons. He and his colleague Shri C. Jain used X-Ray crystallography to unlock the crystalline complex structure that holds actinomycin and deoxyguanosine back in the 1970s. It is this breakthrough that led them to propose the model, now widely accepted by the scientific and medical communities, that shows the features of how actinomycin binds to the DNA.

The book is about what’s known as premeltons, the emergent structures that arise in the DNA due to the presence of non-linear excitations in its structure. Two kinds are presented in the book: B-B and A-A premeltons, which can also be B-A or A-B premeltons, with similarities and differences in key features. Each chapter shows different facts with accompanying illustrations and presents the roles of premeltons in the 5’ and 3’ ends of genes in naked-DNA, as well as how the information presented can affect the scientific fields, specifically molecular biology and biotechnology.

Learn more about the premeltons in DNA with this highly informative and detailed book. Grab your copy today!