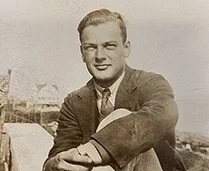 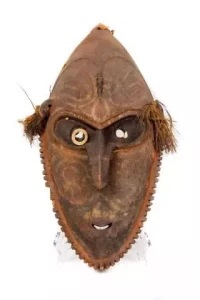 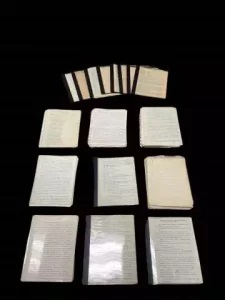 After a year of meticulous research, Willow Auction House is proud to announce the Louis Pierre Ledoux’s Papua New Guinea Collection – Important Papers, Photographs and Artifacts from his 1936 Expedition to the Sepik River. The Auction will be on November 16, 2021, at 12 pm EST. Bids will be taken on WillowAuctionHouse.com, Absentee and Phone Bids, LiveAuctioneers, Invaluable, and Bidsquare.

The result of his self-funded expedition is an extraordinary collection of hundreds of artifacts, photographs, manuscripts, diaries, and letters left untouched for 85 years.

This collection was wrapped in newspapers from the 1930’s and kept in crates, the contents still bear the dark patina of age and use. Ledoux’s collection includes exquisitely carved masks, ancestor figures, spears, and cassowary bone daggers. There are grass skirts, basket bags, and bilum string bags decorated with small shells. Body ornamentation such as plaited armbands, beaded necklaces, and mother of pearl nose pieces are also included, some bearing original labels describing their origin and purpose.

Hundreds of photographs, including contact sheets, original prints, and enlarged prints provide further insight to the lower Sepik River region in the 1930’s.

In preparation for his expedition Ledoux consulted with Margaret Mead, who had shared with him tips on fieldwork in New Guinea, and a 1932 equipment list based on her own expedition there with then husband, New Zealand anthropologist Reo Fortune.

Ledoux never published his manuscript, instead joining his family’s lucrative metallurgy company. He kept the unfinished manuscript, together with handwritten and typed field notes, observations, diaries, etc., including comments by Margaret Mead and subsequent husband, British anthropologist Gregory Bateson. She concludes one section of her commentary with “And I think it ought to make a very interesting and valuable book.”

Here is a Small Sample of Items up for Auction:

Papua New Guinea is home to a vibrant mask culture, and each region has its own style. One identifying feature of Murik masks is their long trunk-like nose (or beak), and a spiral spider design “mabaranego”, the spider represents precision and intricacy.

Similar mask was displayed in the acclaimed 2015 Myth + Magic Art of the Sepik River Papua New Guinea at the National Gallery in Canberra, Australia; another similar mask sold at Sotheby’s (lot 97, Dec. 2020).

The Metropolitan Museum of Art describes a similar openwork figure attributed to the collection of Wolfgang Paalen, a Surrealist painter (1905-1959). The long beak-like nose and lean body likely represent powerful spirits, as being used perhaps as dance wands.

Similar figure held by the Uebersee-Museum in Bremen, Germany is described by Suzanne Greub (see Similar items below) in 1985 “In the area of Angoram …figures of this kind seem to have been carried at dances tied to short bamboo wands.” 1985 Greub, Suzanne (ed.)

The Manuscript includes introductory pages, acknowledgements, prefaces, as well as 6 chapters, diaries, and topic-based pages of Louis Pierre Ledoux’s time amongst the Murik of Kaup and Mendam in the Murik Lakes region of the lower Sepik River.

Plaited basket bags were the most valued goods amongst Murik trade partners offshore. While both men and women made shell and teeth ornaments, it was only women who would weave the plaited basket bags. Each bag, depending on size, design, color, and use, could be traded for particular objects including tobacco, almonds, and even pigs.

In his Diary of his first few weeks in Kaup, (Lot 108 Box F1) Ledoux explains the trade value of the baskets, “Finely woven baskets are made by all of this talk and natives from Aitape and Medang and the islands come and trade for them”.

Further, he explains that “The reason for its great value was that it could only be carried by important men during the mourning period, food collection, and could command a great deal of respect and gifts.” (Lot 108 Box C)

(22 more basket bags of varying sizes, designs, and conditions will be auctioned)

Traditional Lower Sepik River figures, representing clan founders, actual ancestors, ancestor spirits, or mythical cultural heroes are generally called Kandimbong, and include small amulet (malita) figures and larger figures of human and/or anthropomorphic form. They are carved out of wood, sometimes with pigmentation and decorated with shell/fiber/cloth and used ceremoniously, in times of warfare, as love ‘magic’, as well as on a daily basis. They were consulted on various occasions and provided with food/drink much as one would give offerings to deities in other traditions.

Similar figure was displayed in the acclaimed 2015 Myth + Magic Art of the Sepik River Papua New Guinea at the National Gallery in Canberra, Australia; another similar figure sold at Sotheby’s (lot 69, May 2019).

(15 more figures in varying sizes, styles, conditions, and uses will be auctioned)

Willow Auction House brings years of Art and Antiques consulting and handling experience to an auction venue. As pioneers in the Move Management Industry, we have continued to grow and expand, offering everything our clients need when moving, downsizing, and handling estates.

For more information, press only: