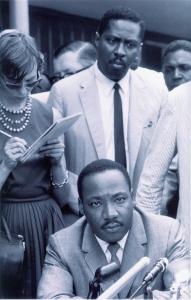 I’ll tell them that collecting a piece of the past while investing in a better future – a better world – for everyone, is something that would’ve made Dr. King very proud of them.”
— Dr. Clarence B. Jones

LOS ANGELES, CA, US, September 3, 2021 /EINPresswire.com/ — Dr. Clarence B. Jones, lawyer, advisor, draft speechwriter and long time friend of Dr. Martin Luther King Jr. has memorialized his legacy, along with the 58th Anniversary March on Washington as a collectable NFT. The first auction of Dr. Jones’ NFT series was hosted at OpenSea beginning on August 28th.

In 1963, the March on Washington for Jobs and Freedom became the largest organized single-place public protest in human history. It gave birth to the riveting “I Have a Dream” speech, and Dr. Clarence B. Jones was there every step of the way. He helped organize and finance the March, helped King craft “I Have a Dream”, and even had the foresight to copyright the well renowned speech before its delivery. To date, it is the only speech in American politics protected and financially exploited in this manner.

Nearly sixty years later, Dr. Jones continues to embrace the future fight for racial and social justice – leveraging the power of both the Internet and NFT market to spread King’s message making a lasting impact for years to come. The unveiling of this one-of-a kind collectible NFT series is dedicated to the Civil Rights Movement. It provides an intimate time capsule to “the struggle” for younger generations, and places a spotlight on Jones’ personal and professional contribution.

Stuart Connelly, Dr. Jones’ writing and producing partner says, “Don’t let ninety fool you, Dr. Jones isn’t exactly slowing down. His interest in NFTs is just the latest example of his lifelong ability to stay on the cutting edge.” Jones, who still teaches at the University of San Francisco, also agrees. “When I was born in 1931, less than half the houses had a phone; TV was science fiction. I’ve been lucky to live through technological advances and I embrace the clever ones early. I’ve been on all sorts of frontiers; cryptocurrency is clearly the financial instrument of tomorrow, just as NFTs are the new frontier for collectors of all kinds.”

In addition to ownership of the stylish piece, which features the original copyright certificate for the “I Have a Dream” speech filed on behalf of Dr. King by Dr. Jones, the winning bidder will also unlock an exclusive meeting with Dr. Clarence B. Jones. “I look forward to congratulating the winner,” Jones says. “I’ll tell them that collecting a piece of the past while investing in a better future – a better world – for everyone, is something that would’ve made Dr. King very proud of them.”

About Dr. Clarence B. Jones
Dr. Clarence B. Jones is one of the last living lions of the USA’s Civil Rights Movement. As Martin Luther King Jr.’s aide-de-camp, he was there during every pivotal movement in the struggle for freedom. Now, Dr. Jones is using the power of the NFT marketplace to share his, Dr. King’s and others’ experiences and respective legacies.