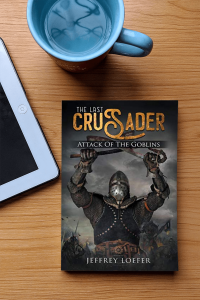 “It was raining hard in the battlefield. Bodies of both human
and goblins were everywhere.

Was the dream just a dream? Or was it a vision of the future that he and his friends need to be ready for?”
— Jeffrey L. Loefer

PITTSBURG, CA, USA, October 19, 2021 /EINPresswire.com/ — Jeffrey Loefer’s The Last Crusader: Attack of the Goblins is an exhilarating fantasy novel permeating with swashbuckling adventures and epic battles against trolls & goblins. Published by Stratton Press, the novel is the author’s debut published novel who has been writing since high school.

The Last Crusader is a printed portal that transports readers into a world where humans and mythical creatures such as trolls and goblins battle it out for survival. The narrative revolves around a young crusader named Brock as he sets to find out the extent of the reality of his dream that opened the novel. The author writes, “It was raining hard in the battlefield. Bodies of both human and goblins were everywhere. The Crusader was all that was left from his fallen comrades but there were goblins everywhere, and the floor was so slick from mud and blood that one slip could cost him his life. He’s exhausted but still firm, ready to strike any goblin that would charge at him. One came from behind, but he turned and slashed at it and it died in one swoop.” The choice to structure the novel in a contemporary language makes the novel more accessible and engaging for the readers. Fans of science fiction and fantasy will enjoy this story; it’s succinct, making it possible to read in one sitting.

Jeffrey L. Loefer was born in Georgia. Having a father from the Air Force, Jeff frequently moved a lot; it was only upon the retirement of his father that the author managed to stay in one place. The author is also a graphic designer and a gamer.

For interested readers, purchase your copy at Amazon and other online retailers.

About Authors Press
Authors Press is an online publishing company and book reseller catering to the needs of both experienced and aspiring authors as well as readers. They offer the best publishing solutions for full-time and independent authors. The company’s team of proofreaders, editors, designers, and publishing professionals are committed to achieve industry standards for their client’s work to be published, marketed, and sold.