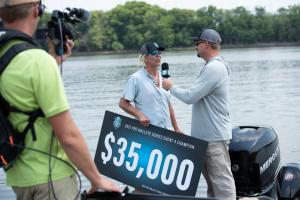 History Is Made With First Woman Champion

On the waters of the Mississippi River, Pool 2, Marianne Huskey fished the PWS five-day walleye fishing tournament in hopes of catching as many walleyes as possible per day. The event was filmed live on the water. Days one and two of the competition used a cumulative weight of fish caught by each angler. All the fish caught during the tournament are scored and immediately released back into the water.

Scoreable fish must be caught before 11 AM each day, and the fish must weigh two pounds or more. If no scorable fish are caught by 11:00 AM PWS rules state all target species will be scoreable. This rule drops the two-pound minimum.

At the end of Day Two, Marianne had caught enough walleyes to put her in fifth place of the 32 anglers. Days three through five in an H2H PWS tournament feature a bracketed-style competition where anglers fish against a single opponent.

Championship Day of the tournament concluded with tie-breaking rules. The victory went to Marianne based on her first four days. On July 16th, 2021, at 1:00 PM CST, Marianne Huskey became the first woman to win a solo professional walleye tournament.
Even Playing Field – Larger Impact

Professional fishing is a sport that shows no concessions or changes of rules based on sex. Both male and female competitors fish in the same waters, during the same period, with the same equipment, and targeting the same fish species. Many other sports have separate fields, and direct competition between the two is uncommon. Complete equality in fishing tournaments solidifies Marianne’s performance even more in terms of gender diversification.
Deeply Rooted in Fishing

Marianne Huskey has been fishing since she was six years old where she started catching perch with her grandfather on Lake Michigan. Marianne’s primary target species is walleyes, and she has fished many pro-level tournaments. Marianne has also won an Angler of the Year Award. Her largest walleye came from the Bay of Green Bay and weighed 12 pounds and measured was 31 inches long. Marianne has a list of sponsors, including Lund Boats. Aside from tournament fishing, Marianne’s impact in the fishing community also includes being a National Professional Angler Association Youth Clinic Director.

Marianne’s next tournament is August 23-27, 2021, on Lake McConaughy in Ogallala, NE. Marianne will be competing against the other 31 PWS Anglers. The Lake McConaughy Event will be the fifth and final event of the PWS before the championship in October. The PWS Championship field will consist of the 16 anglers with the most AOY points of the year. Marianne’s strong performance this year allows her to make it to the championship event held on Lake Chautauqua in Celoron, NY. Fans of professional fishing are welcome to attend any event as live post shows are at local establishments. All the PWS Events are streamed live on the H2H Fishing Facebook Page, H2H Fishing website, and Youtube to watch free of charge. More information about the Head-2-Head Pro Walleye Series can be found by contacting Head-2-Head at info@h2hfishing.com.