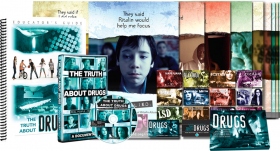 We all know that the solution to drug abuse is not a one-size-fits-all. We need to work together as a community.”
— Thalia Ghiglia, Foundation for a Drug-Free World

WASHINGTON, DC, USA, September 30, 2021 /EINPresswire.com/ — This week, the Drug Enforcement Administration issued a public safety alert warning Americans of the dangerous increase of fake prescription pills containing fentanyl and methamphetamine. The DEA warned that the United States is seeing a crisis of overdose deaths from fentanyl and is warning the public about this unprecedented danger.

Substance abuse continues to rise across the United States taking its toll in the tens of thousands each year on youth and adults alike. A new report shows drug overdose deaths soared by close to 30% from 2019 to 2020, reaching a high of 93,000 with the illegal opioid fentanyl being the primary driver.

Fentanyl is a synthetic opioid that can be 50-100 times more powerful than morphine. Just 150 micrograms carries a significant risk of death. According to the Drug Enforcement Administration, two milligrams of fentanyl can be lethal, depending on a person’s body size. One kilogram of fentanyl has the potential to kill 500,000 people. A kilogram is roughly 2.2 pounds.

Just this week Colorado reported that fentanyl deaths have surged, reaching an average of two fatalities per day and 64 deaths per month. For comparison, in 2018 the average number of fentanyl deaths per month in Colorado was nine. In Fairfax County, Virginia, a report surfaced this last week stating that six young adults were found unconscious in an apartment from cocaine overdoses believed to be from a batch of fentanyl-laced cocaine circulating in the region. This report came on the heels of another from Long Island, New York, in August 2021, stating that six people died from ingesting cocaine laced with fentanyl.

A California father lost his college-age daughter in 2019 when she ingested what she thought was an oxycodone pill. It turned out that this was laced with a lethal dosage of fentanyl. She died at her home two days before Christmas at her home. Her father said in an interview that his daughter, “along with hundreds of thousands of other kids and young adults, was fatally poisoned.” He added, “Fentanyl has changed everything. This isn’t marijuana they are dealing. They’re dealing death.”

Struggling to reverse the trend of overdoses and drug abuse, the Mayor of Washington, DC, rolled out a new public education campaign initiative this past June to combat opioid, alcohol and other drug abuses in the city.

Thalia Ghiglia, faith liaison for the Foundation for a Drug Free World (DFW) in Washington, DC, said, “We’re definitely seeing a fentanyl problem here in our city and surrounding states, just like in the rest of the country. Some people don’t know their drug of choice has had fentanyl added to it. Some don’t think they will be the one to go and others seek it out for its high. The most tragic are the kids who think they are taking an Oxy, Xanax or Adderall pill and it turns out to be fentanyl. And just like that, they’re gone.”

“A lot of these deaths are reported on television news, so some are hearing the message, but getting the information of just how deadly fentanyl has become to young people requires a different approach.

“We all know that the solution to drug abuse is not a one-size-fits-all.

“We need to work together as a community. Many feel it’s not their concern or it’s an ‘over there’ problem and it is somebody else’s responsibility. But, in truth, the solution starts in our own homes, with our own children, having meaningful conversations, getting ourselves educated and then making sure our youth are educated as well as others. We should notice what is happening in our communities and do something about it. This way we can reach everybody,” Ms. Ghiglia continued.

Ms. Ghiglia, who has been working with the Foundation for a Drug-Free World since 2007, has spent the last year liaising with prevention advocates, city agencies and others, bringing the truth about drugs to various populations. DFW’s niche is to bring vital drug information to people in a simple clear way through its drug education booklets, public service announcements and as its award winning documentary film on 14 different drugs.

Working with other agencies and organizations in the city, Ms. Ghiglia has been giving drug education lectures virtually to school-age youth, parents, seniors and adults during the pandemic months, with the goal of bringing more understanding about the dangers of various drugs, especially to at-risk neighborhoods.

DFW get its Truth About Drugs message out through its booklets, videos and its award-winning documentary. It is doing its part in the battle against the influx of drugs to save lives and bring the message of hope and help to those in need. We need to reach people with this message before they become addicted.

People need to be reached with the Truth About Drugs before they become addicted. There is only one way this can be done, and that is a full-community effort, shoulder to shoulder, supporting city officials and having them, in turn, support the efforts of those working directly in the city’s hot spots. The message needs to be brought early on, often, and with true information to combat the lies of those who are profiting from drug dissemination.

The Foundation for a Drug-Free World is a nonprofit public benefit corporation sponsored by the Church of Scientology and Scientologists all over the world that empowers youth and adults with factual information about drugs so they can make informed decisions and live drug-free.

Through a worldwide network of volunteers, the Foundation for a Drug-Free World has gotten 50 million drug prevention booklets distributed. Tens of thousands of drug awareness events have been held in some 180 countries and the Truth About Drugs public service announcements have been aired on more than 500 television stations. These materials and activities have helped people around the world learn about the destructiveness of drugs so individuals can make their own informed decision not to use them.