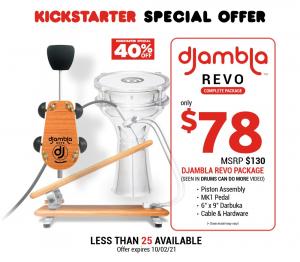 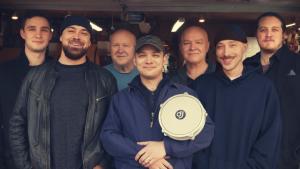 The Djambla is a really clever device! It opens the door to sound manipulation for drummers and percussionists like stomp boxes do for guitars.

The Djambla does its magic acoustically, changing the pitch of a drum mid-note. Tabla or timpani-like parts can now be done… endless possibilities! It’s the invention of the whammy bar for drums”
— Jamie Sitar – 3x Juno Award Winner

BURNABY, BC, CANADA, October 1, 2021 /EINPresswire.com/ — The Djambla is the world’s first device to dynamically (on demand) change the pitch of a drum up to 6 notes, without touching the drum skin, aka, head. The newly patented Djambla does this acoustically, no batteries or wires, please. A foot pedal controls a piston that travels up & down the inside of the drum and controls the airflow. One inch of travel is roughly equivalent to 1 semitone, or whole note.

The name Djambla comes from a mash up of two very popular drums, the African Djembe and the Indian Tabla. Djembe + Tabla = Djambla, and the name cleverly conveys the spin this little device can put on to the champion of drum circles everywhere. Tabla or tympani-like sounds are now within the reach of any convention challenging drummer out there!

And that’s precisely the type of customer the company behind The Djambla is looking for. Calling all early adopters!

The Djambla is the brainchild of Hannu Rauma, marketing executive, guitarist/drummer, and father of 8. He and his 5 sons, father, and a couple of nephews have set up shop in the 2 car garage in the suburbs of Vancouver, Canada. They’ve put a lot of hope into their first venture into the world of crowdfunding. They’ve set their goals in modest, one-step-at-a-time terms and hope to raise enough to get 150-200 units into the hands of the innovator drummers that are going to show the world what this new style of drumming can sound like.

Their patented technology applies to all drums but for today they’re focusing on the goblet style drums first: djembes, doumbeks, and darbukas. Tomorrow is another story, ie., multiple drum configurations that can span the sonic range of a full-scale marimba, but with only 3 drums. Imagine that.
They say the simplest inventions are the best because they don’t take a lot of convincing to put them into use. This couldn’t be truer for The Djambla. The device inserts into your drum in seconds and it’s ready to go. Why hasn’t someone done this before? Just one audition and you’ll wonder where pitch control for drums has been all your life.

If you’re the type that can appreciate an elegantly designed product that has taken advantage of something that’s been under everyone’s nose for centuries and turned it into a commercially viable product, then this just might be for you.

the Djambla – drums can do much more. Hear for yourself!