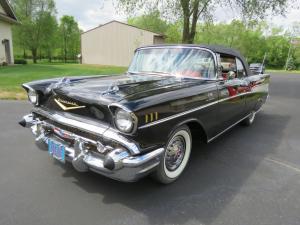 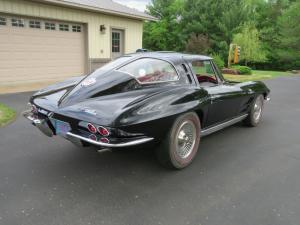 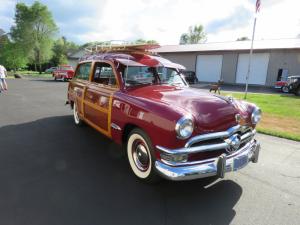 1950 Ford Woody Wagon, complete with surfboard, a total frame-off restoration performed in Los Angeles, the original restored wood on the exterior and done right from bumper to bumper. 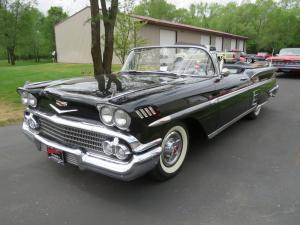 Beautiful 1958 Chevrolet Impala convertible, the first year for the dual headlights and bigger motor, black with a white convertible top, with a 348 hp V8 engine with Tri-Power, 280 hp.

We hope everyone can come and bid on a chance to own one of these fabulous collector cars and more. But even if you can’t attend in person, you can bid online, through www.VanDerBrinkAuctions.com. ”
— Yvette VanDerBrink

The auction has a start time of 9 am Central. Gates will open at 7 am. “We hope everyone can come and bid on a chance to own one of these fabulous collector cars and more,” said Yvette VanDerBrink of VanDerBrink Auctions, the Minnesota auction house conducting the sale. “But even if you can’t attend in person, you can bid online” (thru www.VanDerBrinkAuctions.com).

The auction is a rare and vintage car collector’s dream, packed with rides like a fuel-injected 1957 Chevrolet convertible, a fuel-injected 1963 Corvette with the split rear window, a 1954 Chevrolet Corvette, a 1950 Ford Woody wagon, a 1935 Ford 3-window coupe, the complete Tri-Five series of Chevrolet convertibles and Nomad wagons, amazing 1958 and 1959 Chevrolet Impala convertibles, a 1959 Series 62 Cadillac, great vintage pickups, a 2007 NASCAR rolling body, beautiful customs, and over 300 pieces of automotive memorabilia. Many of the vintage cars have been lovingly restored back to their original showroom condition by Larry and Dawn.

Folks in the Midwest will instantly recognize the Menard name. Menard’s is famous throughout the region as a hardware store chain that sells everything from birdseed to lumber. For years, Larry Menard was the face of the company and could be seen at stores, giving sales and product seminars. His recent death led his wife Dawn to made the tough decision to sell their collection.

Larry grew up on the family farm in Eau Claire, Wisconsin, and learned hard work at an early age. He enjoyed cars, speed and their styling, too, and was just 12 years old when he sold his 4-H calf with the idea of buying his first car, with help from his Uncle Ed. Larry had heard that a neighbor had a 1935 Ford slant black sedan for sale. He promptly bicycled over and bought it.

So, at age 12, he proudly drove that car home (his bike in the trunk), and when he got there his father asked him, “Did you get the title?” Larry had been so excited about getting the car, he’d completely forgotten about the title. But the experience convinced him he was a deal maker who was destined for a life in sales, and he vowed then to start collecting rare old automobiles, too.

Larry’s father didn’t want his sons, Larry and John, to spend their lives farming, and he began a family business, building pre-fab buildings. He gave the boys the first building, which they used to sell lumber out of a boxcar. That modest beginning, of selling lumber and pre-fab buildings, eventually became Menard’s – everything under one roof for all one’s building and home needs.

When Larry was still in high school, he hung out with a friend and kindred spirit who also loved cars and had a sister, too, named Dawn. The two never dated back, then, but years later they were reintroduced at the Menard’s store in Eau Claire by Dawn’s daughter. A strong connection was quickly established and the two became soulmates. It turned out Dawn loved old cars, too.

Larry and Dawn embarked on a life together that was centered around their rapidly growing car collection (and work of course). They loved to go to cruises with car buddies. They never missed Back to the 50s and Good Guys car shows. They had a list of cars that they looked for and actively sought out. One was a 1935 Ford, since that was Larry’s first car. They loved “the hunt”.

Eventually, the collection expanded to include not just classic cars but other American classics: gas pumps, porcelain signs and many items of petroliana and memorabilia. A collection became a museum. Larry and Dawn’s adventure continued for many years along the road of life, through all the twists and turns they encountered, leading up to Larry’s death and Dawn’s decision to sell.

An open-house preview will be held the day before the auction, on Friday, October 1st, from 10-6 Central time, at the Northern Wisconsin State Fairgrounds at 225 Edwards Street in Chippewa Falls, Wisconsin. Masks are recommended but not required for the open-house preview. The auction, on the following day, October 2nd, starting at 9 am, will be held in the Expo Building.

For more information about the sale of the Larry and Dawn Menard collection on October 2nd, visit www.VanderBrinkAuctions.com.