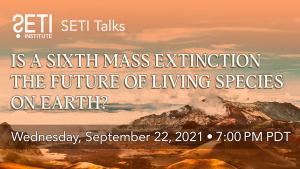 There have been five mass extinction events in history. What can our understanding of science teach us about surviving another one?

MIAMI, FL, USA, September 13, 2021 /EINPresswire.com/ — Human society and the global ecosystem are at a critical point, facing climate and biodiversity crises. Some say a sixth mass extinction of wildlife on Earth is accelerating. More than 500 species of land animals are on the brink of extinction and are likely to be lost within 20 years, a number equivalent to the same lost over the last century.

Earth has been through severe extinction crises in the past. There have been five mass extinction events during the last 450 million years, each eliminating 70-95% of all plants, animals and microorganisms that were existing at the time. These events were caused by various forces including volcanic eruptions, oxygen decrease in oceans, and collisions with an asteroid. Following each event, it took millions of years to regain the numbers of species comparable to those before the extinction event.

What can our understanding of ecology, evolution and history teach us about surviving our current situation? The SETI Institute has invited two experts from the California Academy of Sciences to discuss this topic. Scott Sampson, the executive director and a dinosaur paleontologist, and Peter Roopnarine, the Curator of Geology for the academy, whose research focuses on understanding the evolution of ecological systems.

Franck Marchis, a SETI Institute planetary astronomer, will moderate the discussion about what we know about past and potential future mass extinctions, what is at stake for the fate of all living species on our planet and what we can do to preserve Earth’s biodiversity.

The chat will stream Wednesday, September 22, 2021 at 7:00 PM Pacific time live from the California Academy of Sciences in San Francisco.

This chat is online and if you would like to tune in please make sure to register for free. All SETI Talks are presented at no cost.

If you would like to sponsor a future SETI Talk, please email the SETI Institute at development@seti.org .

About the SETI Institute: The institute is based in Mountain View, California and is the world’s pre-eminent organization focused on the scientific search for extraterrestrial intelligence. Its more than 100 research scientists investigate the nature of the universe and the prevalence of life beyond earth.

Since 2015, the CarlKruse.org blog has highlighted non-profit organizations and people making the world a better place. The blog has previously covered the SETI Institute and its talks in articles such as Can We Define Life? Blog members were involved in the SETI@Home project and closely follow developments in SETI and space exploration.