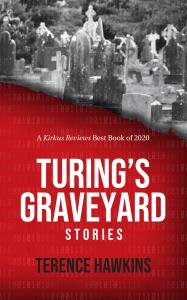 Acquisition brings all of author Terence Hawkins’ books under The Calliope Group banner.

TULSA, OK, UNITED STATES, October 5, 2021 /EINPresswire.com/ — “These thirteen powerful, well-crafted stories by Hawkins have been aptly compared to The Twilight Zone: they offer a similar sense of dread and moral disquiet. These are tales of how things go wrong…they provide a beautiful reading experience”- Booklist

The Calliope Group, an independent publishing house in Tulsa, has announced the acquisition of Turing’s Graveyard, a collection of short stories from author Terence Hawkins. Acquired from Running Wild Press, Turing was named a Best Book of 2020 by Kirkus Reviews. The book will be available everywhere on October 5th.

An online affair that isn’t what–or with what–it seems. Jesus’ last thoughts on the Cross. The birth of science in ancient Sumer and its death in West Hartford. The stories of Turing’s Graveyard are driven by ideas, but also full of dark humor, as when we see the miseries of a middle-school boy drafted into his stepfather’s civil war re-enactments, or The Sopranos as written by Raymond Chandler.

Tonya Hurley, New York Times and international bestselling author of the Ghost Girl series calls Turing “a collection of provocative and mesmerizing short stories that force the reader to confront the nature of life and death, intimacy and indifference, and even the boundaries of reality itself . . . Brilliant.”

“We are pleased to acquire Turing’s Graveyard and bring all of Terence Hawkins’ work under the Calliope banner,” notes Shawn Crawford, Publisher of The Calliope Group. Calliope has previously published Hawkins’ novels The Rage of Achilles and American Neolithic.

Terence Hawkins was raised in Fayette County, PA, a former coal mining hub near the setting for the original Night of the Living Dead. He graduated from Yale, where he was Publisher of the Daily News. In 2012 he became the founding Director of the Yale Writers’ Conference, which he developed and managed through 2015. He now directs The Company of Writers.

Also naming his 2014 novel American Neolithic a Year’s Best Book, Kirkus Reviews called it “a towering work of speculative ﬁction that will have readers rethinking what it means to be human.”

The Calliope Group recently released the Tenth Anniversary Edition of The Rage of Achilles. A re-imagining of Homer’s Iliad, Historical Novels Review declared, “Hawkins’ tale moves with the force of a cyclone. . . It will be impossible not to be entertained and moved by this rendering of the age-old story.”