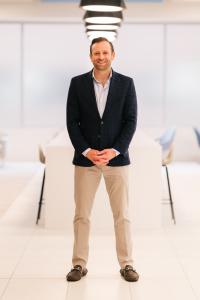 From kitchen table to five offices and largest property tax loan originator in the state of Texas, Rome gives tips on hiring, happiness and giving back.

I learned early the most important factor contributing to a business’ success is its people; that’s why we strive to keep our associates and clients happy.”
— Trey Rome

As Founder/CEO of Home Tax Solutions (HTS), the largest property tax loan originator in the state of Texas, Rome founded the company to give Texans an affordable, low interest, fast solution to help them pay their property tax bills. HTS has achieved an average annualized revenue growth rate of 55% over the past three years, and with 23 on staff, managed to capture one-third of all property tax loans in Texas.

Nine short years ago, Rome started HTS at his kitchen table. Today, he has offices in Houston, Austin, San Antonio, and McAllen, and is headquartered in Dallas. Last year, his company was named one of the “Best Places to Work” and Rome received the honor of one of the “40 Under 40” business leaders in North Texas by the Dallas Business Journal.

Rome is still involved in the hiring process at HTS and sites these important traits as keys to his business success: finding the right people, placing major emphasis on a person’s character, and analyzing how well they will fit into his HTS business family.

One of the most important qualities Rome looks for in leadership is impeccable follow-up. “It makes a difference when you have a collaborative meeting with a leader, determine action plans, and trust they will be implemented,” says Rome.

He creates a diverse climate with age, race and gender hires and believes diversity enables different points of view that spark innovation and deliver competitive advantages. 70% of the HTS staff is female with most team leaders being women, 13% of staff is African American, 35% Hispanic and 4% Asian.

Rome suggests happy employees is key to retentions, which is one reason he hired a healthcare consultant to develop benefits better than any others in his industry.

Rome believes in giving back to the community, individually and as a company. “It is a way to foster employee unity and it’s our obligation to share our successes. HTS tries to support all their personal charities, too. We have given our time and treasures to St. Jude’s Hospital, Jewish Family Food Services, The Salvation Army, The Family Place, CASA, and many others in the communities in which we serve in Texas,” says Rome.

A fifth-generation Texan, banking was Rome’s first job graduating college. His boss was a great mentor and helped jumpstart his entrepreneurial spirit. That, along with what he learned as a student at SMU, “the most important thing about a business is its people,” are the two guiding forces and principles which has helped take Rome’s business from 0 to 100 in nine short years and can help others achieve similar success.

He attributes his business and personal success to the women in his life: his mother, his wife, the women who work for him, and that very first boss. Rome graduated from SMU; lives in Dallas with his wife, two sons, and a dog. You can reach Rome at trey@hometaxsolutions.com