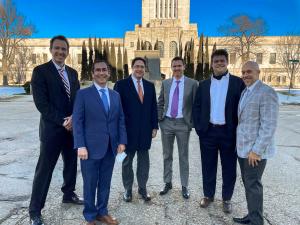 Members of the Telcoin team are joined by Senator Mike Flood (center left) and CEO Paul Neuner (center right) at the Nebraska State Capitol in February 2021.

LINCOLN, NEBRASKA, UNITED STATES, May 26, 2021 /EINPresswire.com/ — In an effort to bring the state of Nebraska to the forefront of national financial regulatory innovation, Governor Pete Ricketts signed into law today Legislative Bill 649, also known as the Nebraska Financial Innovation Act. Telcoin, a blockchain-based fintech aligned with the telecom and mobile money industries globally, drafted the legislation as it seeks to bring its own digital asset-backed financial services to US consumers in a compliance-first fashion.

Introduced by Senator Mike Flood, the legislation creates a new state banking charter for digital asset depository institutions. The charter is the first of its kind to be shaped around consumers and connecting them to decentralized finance (DeFi) in a safe and regulated manner.

“At its heart, this new charter represents an alternative type of bank that does not have the right to loan your money to somebody else,” says Telcoin CEO Paul Neuner. “Institutions under this new charter will use blockchain technology to empower users to self-custody digital assets and put their money to work for their own benefit.”

The effort was engineered by Telcoin advisor Mark Quandahl, the former Director of the Nebraska Department of Banking and Finance. “This new charter is about leveling the playing field and letting technology determine access to capital,” said Quandahl. “It can be a much better deal for under-served segments of society who feel left out by the current banking system.”

The legislation aims to turn Nebraska into a major hub for digital asset companies and those interested in innovative new financial products and services based on blockchain technology. “This new charter sends the right message that Nebraska is open for business in this exciting new space,” said Senator Flood. “I am excited to welcome Telcoin to Norfolk, Nebraska.”

Follow Telcoin for more information and to be the first to hear updates about Telcoin’s plans for Nebraska and the US market.