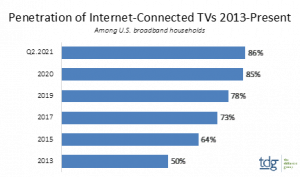 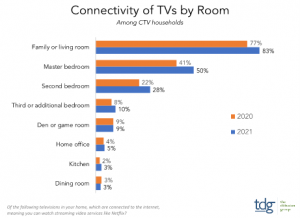 CTVs Future Reaching into Other Rooms of the Home

Roughly 85% of all US households now subscribe to a high-speed internet service, which speaks to its value in today’s home; however, recent data suggests the pace of new gains is quickly diminishing.”
— Michael Greeson

LOS ANGELES, CA, UNITED STATES, September 8, 2021 /EINPresswire.com/ — According to new research from TDG, a division of Screen Engine/ASI, the diffusion of internet-connected TVs (CTVs) in the U.S—now inherently tied to the uptake of high-speed residential internet services—is slowing. At the same time, however, CTVs are reaching beyond the living room and master bedroom to other rooms of the home.

“Roughly 85% of all U.S. households now subscribe to a high-speed internet service, which speaks to its value in today’s home,” notes Michael Greeson, president and principal analyst at TDG. “However, recent data suggests the pace of new gains is quickly diminishing.”

Recent market gains provide a clear sign of what the future holds. In second-quarter 2020, the number of broadband households increased by 1.35 million. A year later, only 900,000 were added to the tally, a decline of one-third. TDG expects this trend will continue, which is not at all unexpected. “When products and services near saturation, growth declines to the low single digits and the market becomes a zero-sum game in which one operator’s gains are actually the losses of another.”

Consequently, growth in the number of CTV households has plateaued. August TDG research finds that 85% of broadband households use a CTV, up roughly 25% from 2015 but only 1.2% from 2020.

Thus, new growth in CTV penetration will come in small increments. The more steadfast opportunity is in growing the number of units per home, a trend that is well underway.

Among CTV households, the device’s presence in the home living/family room increased from 77% in 2020 to 83% today. The most notable increases, however, occurred in the master bedroom (up from 41% to 50%) and second bedrooms (up from 22% to 28%), with penetration in most other rooms also increasing (except for den/game rooms).

This pattern is hardly new; rather, it follows the diffusion pattern of most all new TV technologies—that is, as new TVs enter the household, they replace the primary TV (living/family room) which is moved to the master bedroom, then to the second bedroom, etc. and ultimately to the recycling bin/center.

Featured research is from TDG’s 11th annual Benchmarking the Connected Consumer study, a survey of 2,000 household decision makers that subscribe to a residential broadband service. For more information about this new project, please contact Laura Allen.

About TDG (a Screen Engine/ASI Company)
TDG provides actionable intelligence on the quantum shifts impacting consumer technology and media behavior. For 16 years, we’ve helped technology vendors, media companies, and service providers master the digital transformation and meet modern viewers on their terms – whenever and wherever that may be. Learn more about how we can help improve your digital video strategies.