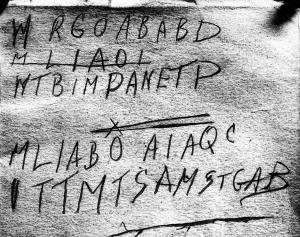 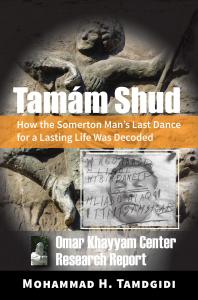 The code was a quatrain offering a gist of why and how The Somerton Man planned his last dance for a lasting life. It was the creative DNA of his suicide plot.

The report also asks a pertinent question about another fold of the mystery, that is, why did it take so long to decipher a code that could have actually been decoded much earlier?”
— Mohammad H. Tamdgidi, Ph.D., Sociologist and Report Author

The Somerton Man (TSM) case has over the past seven decades raised so much curiosity and been so widely reported, archived, and documented online, that it hardly needs an introduction. The interest about the case has been so enduring that recently, following continued failures to identify The Somerton Man, his body was exhumed on May 19, 2021, for deeper DNA analysis. The DNA analysis investigation is still underway at the time of publication of this report, aiming to find answers that can shed final light on the identity and the story of the deceased man.

According to the new OKCIR report, the mysterious code appearing on the back page of a first edition copy of Edward FitzGerald’s The Rubaiyat of Omar Khayyam—found months following the death of The Somerton Man in South Adelaide, Australia, on Dec. 1, 1948—was a suicide contemplation and planning note he was poetically drafting for himself in the form of a quatrain on the back of his copy of The Rubaiyat, giving a gist of why and how he planned to carry out a deliberately mystery-laden suicide as his last dance for a lasting life. The code was the creative DNA of his suicide plot.

It was written in the ‘Tamám Shud’ transliteration style—in this case not from Persian, but from Arabic with which The Somerton Man must have been familiar, either natively due to coming ancestrally from the ethnically diverse and widely multilingual Russian Caucasus and/or by training and education. In other words, the ‘Tamám Shud’ torn-out piece found in TSM’s fob pocket not only served as a bread crumb lead to his suicide note, it also offered the key to the code’s deciphering.

TSM’s ‘code’ offers the DNA, so to speak, of his last dance performance in public hoping for a lasting life, one that was sketched amid his medical suffering. He was reflecting on his life, terminal illness, and expected imminent death, while reading the meanings conveyed about life and death in FitzGerald’s translation of Omar Khayyam’s Rubaiyat—a work of art that offered TSM a practical and proven example of how one can physically die but endure in human memory and spirit forever.

The new report mainly focuses on deciphering TSM’s code, but the findings are also used to shed brief new light on one and/or another alternative wider story of what took place in Adelaide in 1948, in the years leading to it, and in the decades thereafter. The report invites readers to rethink the relevance of Omar Khayyam’s poetry to the case, and also asks a pertinent question about another fold of the mystery, that is, why did it take so long to decipher a code that could have actually been decoded much earlier?

In Tamdgidi’s view, the Somerton Man or Tamám Shud case has important lessons for us beyond the confines of the personal troubles of a man and those he knew, inviting us to use our sociological imaginations to explore such troubles in relation to the public issues that concern us all beyond the shores of Australia, and beyond the national and disciplinary walls fragmenting our lives, universities, and scientific methods in favor of transcultural and transdisciplinary modes of inquiry.

Given what the code’s deciphering can reveal about the possible geographical roots of TSM’s ancestry or even his possible surname or nickname, it is hoped that the new information will help narrow down and focus the efforts underway by specialists in analyzing his DNA and physical remains in favor of bringing a closure to this case. There is still much to be learned and discovered about TSM, so the report can hopefully be another new beginning toward resting the case in a fruitful way.

The report ends with a dancing celebration for deciphering the code as a new window to learning the true story and possible identity of the Somerton Man. The links to the dance clips are included in the report and also available on the report’s publication page at OKCIR.

“Tamám Shud: How the Somerton Man’s Last Dance for a Lasting Life Was Decoded—Omar Khayyam Center Research Report” is published in print (paperback and hardback with dust jacket) and EPub and PDF digital formats and is available at major online bookstores worldwide and from the Okcir Bookstore.

Mohammad H. (Behrooz) Tamdgidi (pronounced “tamjidi”) is the founding director and editor of OKCIR: Omar Khayyam Center for Integrative Research in Utopia, Mysticism, and Science (Utopystics) (www.okcir.com) and its journal, “Human Architecture: Journal of the Sociology of Self-Knowledge” (ISSN: 1540-5699), which have served since 2002 to frame his independent research, teaching, and publishing initiatives. Tamdgidi holds a Ph.D. and M.A. in sociology and a graduate certificate in Middle Eastern studies from Binghamton University (SUNY). He received his B.A. in architecture from U.C. Berkeley. Other than his 12-book series on Khayyam currently in progress and commonly titled “Omar Khayyam’s Secret: Hermeneutics of the Robaiyat in Quantum Sociological Imagination” (four books of which were published in 2021), he has previously authored “Liberating Sociology: From Newtonian Toward Quantum Imaginations: Volume 1: Unriddling the Quantum Enigma (Okcir Press, 2020), “Gurdjieff and Hypnosis: A Hermeneutic Study” (Palgrave Macmillan, 2009) and “Advancing Utopistics: The Three Component Parts and Errors of Marxism” (Routledge/Paradigm, 2007). Tamdgidi is a former associate professor of sociology specializing in social theory at UMass Boston and has taught sociology at SUNY-Binghamton and SUNY-Oneonta. Due to research commitments facing urgent deadlines, and preferences for written communication and privacy, the author can be reached only by email.