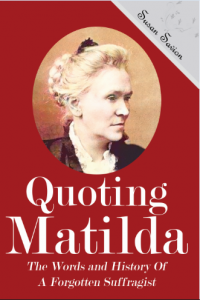 WILMINGTON, DELAWARE, UNITED STATES, September 24, 2021 /EINPresswire.com/ — With her book, “Quoting Matilda”, Susan Savion put new life into the words of women who devoted their lives to seek redemption and who were denied equal rights under the law. She creates a tribute to the women’s rights movement and forgotten suffragette. This highlights the great gift of women with a fascinating tone and full of inspiration.

Matilda Joslyn Gage was involved in the women’s movement from 1852 until her death in 1898. She was born to an abolitionist family in the upstate of New York. Indeed, her childhood home and her later Greek Revival home (now a museum dedicated to her) in Fayetteville, New York were both stops on the Underground Railroad. She became a notable speaker and writer on women’s suffrage along with well-known historical names, Susan B. Anthony and Elizabeth Cady Stanton. Matilda usually evokes the response “Who?” and was best known for her feminist and suffragist activities.

However, unlike the others, Matilda was “written out of history” for many years because of her radical feminist’s perspective. Inspired by the Haudenosaunee women, her neighbors, who adopted her into their wolf clan, she was determined to gain the rights of property ownership, governance and equality of power for her 19th century sisterhood. She fought against the suffrage struggle and political climate for Native Americans, enslaved persons, and anyone else impacted by government control.

Matilda also championed women inventors and was the inspiration behind her son-in-law L. Frank Baum’s 14 Oz books. She had a life-long desire for justice and equality for all and was connected to the ideas of Theosophy. This moved her to take on the inequality of women in religious institutions. Along with Stanton, Gage published The Woman’s Bible. Her book, Women, Church and State was judged as “going too far” by many. You will find her immensely quotable.

Prepublication reviews reveal an informative, quick read and refresher about the women’s rights movement. It gives the readers even more respect for all the women who came before and their life’s work of ensuring that women had a political voice and therefore independence in future generations. This book challenges inequality with full of courage and determination, and embarks on moving forward from slavery to reproductive rights to religion through conviction.

“Quoting Matilda” is available in different formats on Amazon.

Susan Savion grew up on a farm near Highland, Illinois. She has spent most of her career as a teacher and taught in rural, small town, suburban, and inner-city schools at all levels. She was also a gymnastics judge for ten years.

Susan has authored four middle-grade-teacher resource books, namely, Quotes to Start the Day, Quotes That Bring History to Life, Quotes to Stretch Your Brain, and Quotes to Spark Discussion. She is a member of Women Transcending Boundaries. She also edits a Transpersonal Psychology newsletter and is involved in many environmental groups and activities.