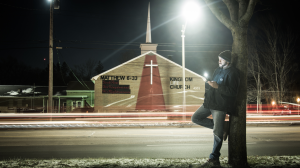 DETROIT, MI, UNITED STATES, September 2, 2021 /EINPresswire.com/ — The highly-anticipated and world-recognized ArtPrize ® international art competition returns to Grand Rapids this month for an 18-day citywide showcase of artwork spanning all mediums. Among this year’s featured artists is Detroit native, former Marine, and Iraqi war veteran Walter V. Marshall. His 13-piece photography exhibition entitled, SteepleChase, will be on display at Veterans Memorial Park (Has Heart venue} from Sept. 16 to Oct. 3 alongside the works of several other military veterans. ArtPrize® is a free event and open to the public.

The SteepleChase collection depicts Marshall’s enfolding pilgrimage across Michigan in pursuit of spiritual and emotional reprieve from life’s pressures. He found that reprieve by chance.

“At the time, I was weighed down by the heaviness of life … so many things were out of my control that I found myself battling depression and anxiety,” he recalled. Encouraged by his VA counselor to focus on self-care and pursue his passions, he directed his focus to his longtime love for photography. Inspiration came after spending an evening taking photos of his young family when he turned his camera toward the setting sun. In the foreground was a church spire. The resulting images triggered something within Marshall … a sense of peace, artistry, and soothing calm. In that moment, SteepleChase was born.

In his journey to capture that inspiration on camera, Marshall’s journey took him and his family across Michigan, resulting in poignant images framed within urban and small- town backdrops. The resulting photographic essay became Marshall’s primary self-care activity and the impetus for his desire to capture and share the inspiration these landmarks are built to convey.

On the twentieth anniversary of 9/11 (September 11th) Marshall will install his SteepleChase exhibit at Veterans Memorial Park. He and 20 other military veterans are banding together to support each other in this year’s competition. News media will be invited to interview Marshall, the other military veterans, and venue sponsors.

About the artist
Walter Marshall served in the United States Marine Corps. during the Iraqi war and is an acclaimed three-time Emmy-award-winning videographer. He uses photography and film to capture perishable moments and credits his military experiences along with his Christian faith for allowing him to balance the difficult concepts of death and sacrifice. The Detroit Institute of Arts featured his early work, which was critiqued by late Harlem Renaissance photographer Gordon Parks. Through his life of service as a veteran, Walter aims to inspire others.