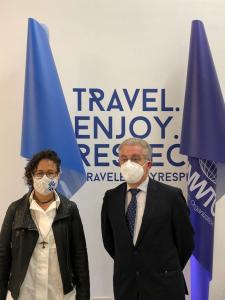 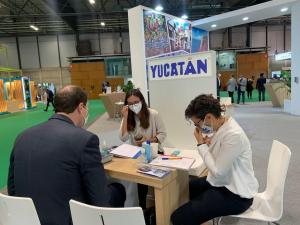 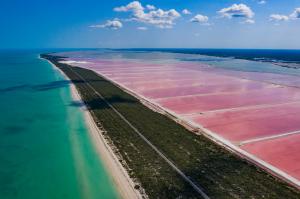 Las Coloradas, one of the many locations to be experienced in the state of Yucatan.

State of Yucatán participated in FITUR to strengthen existing accounts, develop new contacts, and promote Tianguis Turístico 2021, to be held Nov. 21 to 24.

MADRID, NY, SPAIN, May 25, 2021 /EINPresswire.com/ — Led by Minister of Tourism Michelle Fridman Hirsch, Yucatán’s Ministry of Tourism (Sefotur) generated great interest among attendees at the recently concluded Feria Internacional de Turismo (FITUR) travel confab in the Spanish capital, thanks not only to its renowned cultural, gastronomic, historical and nature offerings but also how it’s adapted to the needs of post-Covid-19 travelers and stands out as a destination with some of the best safety, biosafety and security protocols worldwide — which appealed to representatives of airlines, travel agencies, tour operators and other industry players in attendance.

Yucatán participated in FITUR as part of the Mexico stand with the country’s Ministry of Tourism, which is headed by Secretary of Tourism Miguel Torruco Marqués, and representatives from nine other Mexican states.

During the fair, Yucatán focused on three main objectives: the maintenance and strengthening of existing accounts, development of new contacts and alliances highlighting the benefits and the tourist offer of the destination, and promoting and inviting key industry players in attendance to participate in Tianguis Turístico 2021, to be held Nov. 21 to 24 in the state’s capital city, Mérida.

These B2B (business-to-business) meetings provided the ministry benchmarking opportunities to measure and gauge how market reactivation is evolving and how industry partners perceive the global situation. In general, most said they feel confident the tourism industry will achieve a greater recovery for the last quarter of this year and the first quarter of 2022 and stressed that health-and-safety conditions remain a priority.

Likewise, Fridman Hirsch was invited to participate in the FITUR Woman event, made up of a select group of female tourism leaders, government ministers and senior officials of the World Tourism Organization (UNWTO) and the World Travel and Tourism Council (WTTC), among others, who met to discuss policies to strengthen the position of women in and through the tourism industry.

In addition to scheduled business meetings, Yucatán held an important meeting with UNWTO Executive Director Manuel Buttler, with a strategic agenda of actions. These included the invitation to Yucatán and the presentation of a series of programs and products that include sustainable and inclusive projects such as the Aldeas Mayas program as an agent of change for communities in the state’s interior and that adhere to the preferences of the 21st century traveler. Other topics addressed included possible participation of the Yucatán Tourism Observatory in the UNWTO Observatories program “MST Measuring the Sustainability of Tourism,” whose focus encompasses environmental and social sustainability, as well as the possibility that Yucatán would host future UNWTO events.

FITUR 2021 was carried out under the highest internationally established biosafety standards, limiting and maintaining control over attendee capacity and requiring mandatory use of masks, temperature checks and negative PCR tests. Safe distances were also maintained and the show pavilion was continuously ventilated.

FITUR, held annually in Madrid, was the last international event in the tourism sector around the world to take place last year before the pandemic. It is important to mention that the number of business appointments and work meetings in which Yucatán participated were in accordance with the number of participants and attendees at FITUR, aligning with the biosafety protocols established by event organizers.