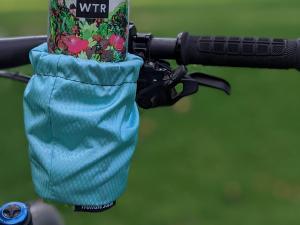 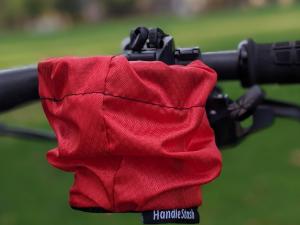 HandStash in Red Hot color mounted to a bike handlebar

Launched during the pandemic, the original shock-absorbing cup holder will now be available to bike shops, nationwide.

We believe in the importance of independent bike shops. Having our product hit these stores’ shelves is very exciting!”
— HandleStash founder and CEO, Adam Saplin

HandleStash shipped its first cup holders to customers in April of last year during the worldwide pandemic shutdown and has be selling primarily through their own website to this point. “We believe in the importance of independent bike shops. Having our product hit these stores’ shelves is very exciting!” said founder Adam Saplin, who started designing the shock-absorbing cup holder two years ago.

Saplin continued: “The bicycle cup holder has a reputation for being a cumbersome and largely ineffective accessory. Traditionally, it isn’t a part most cyclists would consider using. Our goal was to make something that appeals to any rider; from beach cruisers, to serious commuters and mountain bikers, even touring cyclists. We rethought the traditional cup holder design and ended up with a product that any rider will love. Whether you are carrying an extra bottle on long and intense rides, sipping a soda on a ride with your kids, or bringing coffee on your commute, HandleStash is sure to impress!”

HandleStash is made from heavy duty nylon ripstop fabric and has a built-in accordion style spring enabling small drinks to sit up high, while allowing heavier drinks to sink lower for additional stability. The spring allows the drink to “float as if on air.” Combined with a drawstring cinch at the top, the holder has proven excellent at shock absorption, preventing spills and the ejection of drinks when riding, even over bumpy terrain. It holds anything from skinny cans to 32oz to-go cups and can rotate 360 degrees to attach to almost any handlebar.

HandleStash is based in Denver, CO. The company partnered with Broomfield, CO based Third Eye sewing studio and plastics company, Irwin Enterprises in Lafayette, CO; creating an effective Colorado supply chain. This enables HandleStash to respond quickly to rising customer demand. QBP supplied stores will carry four colors initially, including Red Hot, Influencer Blue, Lime Green, and Classic Black. The HandleStash cup holder retails for $38 to $45 and is available to consumers at independent bike shops or directly on the HandleStash website at HandleStash.com.