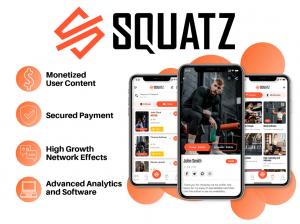 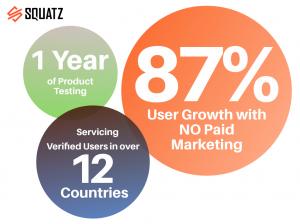 We have a founding team led by Harvard University-educated techies, developers, and creatives with a combined work experience that includes building two companies with sales exceeding $170 million.”
— Jeremiah Brach – Co-Founder and COO

“Squatz Fitness is a platform that connects fitness trainers and fitness seekers in real-time – enabling them to train anywhere, either in person or virtually. Our software allows fitness trainers to leverage their free time and easily market their services to anyone seeking new skills, motivation and the help to achieve fitness goals,” says co-founder and CEO David Crowley.

“Our company is growing rapidly,” states co-founder and COO Jeremiah Brach. “We have a founding team led by Harvard University-educated techies, developers, and creatives with a combined work experience that includes building two companies with sales exceeding $170 million. Squatz has acquired organic users in over 12 countries and an 87% user growth in our first year. That’s because our company business model and structure focus around a profit margin of 80% – and is built to increase as users within the network grow,” Brach elaborated.

The Squatz Company is currently in a rapid growth stage, and the new opportunity to crowdfund via individual investors as opposed to larger conglomerate firms invigorated the founding team. “It’s an opportunity for us to extend our operations and company to both the users we serve as well as to the general public,” states Brach.

This past month, Squatz spoke at the United Nations Data Forum, vowing to help private and government organizations prevent data abuse and issues surrounding human trafficking. This month Squatz also announced the launch of a new Nationwide Corporate Wellness program specifically aimed to meet the demands of the film and television industry. In response to a possible nationwide IATSE union strike, Squatz has developed a Physical and Mental Wellness Partner Program specifically tailored to meet the unique demands of the film industry. The wellness program gives employees and crew members direct access to on-site and virtual health resources (including, but not limited to – fitness coaches, mental health experts, nutritionists, guided meditation seminars, and more). Employees can access these services while at or away from the job site.

“We’re very excited to be where we are today and to have grown Squatz into the thrilling venture it has become,” says Jeremiah Brach.